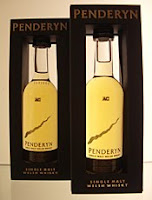 Penderyn (pronounced Pen-derrin) is the only single malt whisky distillery currently operating in Wales. Located in the village of Penderyn in the Brecon Beacons National Park in south Wales, the distillery is one of the youngest in the UK. It is owned by the Welsh Whisky Company, which was formed in 1998 and production began in September 2000. Penderyn is the first distillery to produce single malt whisky in Wales for over 100 years with the last one, Frongoch, closing in the late 19th century. Prince Charles, the Prince of Wales, is one of the distillery's biggest supporters and serves Penderyn whisky at his Highgrove House residence.

The production at Penderyn is unique. They buy pre-made wash from a local brewery that is made to their specific recipe and then distil this in to whisky. This is method is illegal in the Scottish whisky industry where the mashing and fermentation must happen on the same site as the distillation, however the water used is taken from a well close to the distillery. Their range is small and consists of a regular bottling (which is around seven years old) and a lightly peated version of the same age. New expressions, including this sherry cask finished whisky, are being added regularly as more stock reaches maturation.

The colour of this Penderyn Sherry Wood Finish is golden amber and the nose has an interesting combination of aromas - there is dried fruit (think of sultanas and orange peel), caramel, something spicy (reminding us most of cloves) and herbal grassy note (imagine dried grasses or hay). The nose is very pleasant and makes you want to sit and sniff it for ages. On the palate, there is an initial sugary sweetness and this is reminiscent of crumbly brown sugar and honey. Then a distinct dried fruitiness appears (those sultanas again mixed with dried apple). It is also slightly buttery and coats the inside of your mouth, before finally the herbal grassy note comes through again. The finish is again initially sweet before the grassiness really kicks in and makes the finish quite dry. A damp woody note and a sudden sharp alcoholic burn finishes things off.

This Sherry Wood Finish is very pleasant, rounded and smooth. It is very easy to drink and would be a good beginners or introductory whisky. The sherry cask has influenced the whisky well and has added more depth and complexity to the light, fresh and grassy quality of the original Penderyn. The only slight disappointment is the very end of the finish but other than that it is very good, well balanced and enjoyable with some lovely characteristics combining together. It is available at selected whisky retailers and from the distillery shop and should cost £30-35 a bottle.
posted by Matt C at 7:29 AM

Really i would love to have some Penderyn Whiskey as it is good for beginners.The way it is being described in the last paragraph will definitely influence novice drinkers to try once and also can create new drinkers.The support of Prince Charles and his people will help it to survive longer.And if the quality remains the same for ever,definitely it will surpass other brands and will become the most sought after brand very soon .I feel Cohiba Cigar along with the Penderyn Whiskey will become an excellent combination.