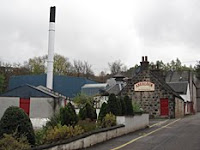 Aberlour is a Speyside whisky distillery that is located in the village of Aberlour, which sits on the banks of the River Spey. It was founded in 1826 by James Gordon and is currently owned by Chivas Brothers, part of the larger Pernod Ricard beverage group. In 1879, the distillery was almost completed destroyed by fire and it was re-built on a different site by a local wealthy grain merchant called James Fleming. He moved sites to take advantage of an abundant fresh water supply at the other end of the village’s main street. Fleming had further massive influences on the town by financing the building of town hall (which carries his name), a cottage hospital, a school, the installation of electric street lamps and a bridge across the River Spey.

Aberlour is currently one of the best selling single malts in the world and is mainly known for its use of sherry casks during maturation. It sits comfortably within the world’s top ten for volume of sales (7th place in 2008) and is the best selling single malt whisky in France. Aberlour is also popular in the UK and southern Europe. The core range consists of a 10, 12, 16 and 18 years old and these are joined approximately once a year by a cask strength single batch whisky named A’bunadh (pronounced a-boona). A’bunadh translates as 'origin' from Gaelic and the whisky in this series is believed to be the closest in style to the whisky produced at Aberlour in the late 1800s. The 26th batch has just been released.

Our tour of Aberlour began in the visitor’s shop, which is positioned at the entrance of the distillery and must have previously been a gatehouse. We are led down the main driveway to an outbuilding that has been converted in to a boardroom. Here, our guide called Dennis begins a 15 minute story of the history of whisky in which he cleverly incorporated the history and story of the Aberlour distillery. He brought the story right up to the modern day and we were most impressed by the way that one distillery was put in to the context of the entire whisky industry. The tour continued in an entrance area of the distillery where displays, exhibits and Dennis filled us in with other interesting moments of local history and gave an explanation of the three basic ingredients used in the whisky making process (water, barley and yeast). He also threw in a couple of what we were soon to realise were his customary one liners! 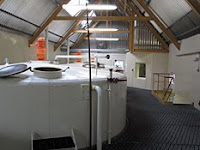 Dennis then led us through to the milling area and then on to the mash tun and washback room. Aberlour has one mash tun and six washbacks, all made from stainless steel. Here, Dennis explained the mashing process and we all got to see this in action before we moved on to an explanation of fermentation and the adding of yeast, intermingled with a couple more one liners and anecdotes (some of which were actually quite funny!). Everyone saw the fermentation happening and it was good to see this process at different stages in the different washback tanks. At each point of the tour it is worth noting that detailed explanation boards had been placed that summarised what was being said. This was a nice touch. 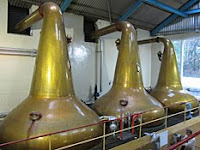 The tour was then taken in to the stillroom and it was noticeably much warmer in here. Aberlour has four stills - two wash and two spirit stills - and these produce over four million litres of spirit per year. The set up of the stills is slightly unusual here as the two wash stills are paired together but the two spirit stills are positioned at either end, rather than next to each other. We also learnt about the industry standard of marking anything (piping, door clamps etc) relating to the wash still in red and anything relating to the spirit still in blue. The process of double distillation was explained, as was how the spirit safe worked.

Finally, we came to the warehouse where Dennis talked about the different styles of wood that they use for their casks at Aberlour. These are predominantly sherry casks but they do also use a decent number of bourbon casks. We then had the sampling session in this part of the warehouse and the notes for this are below. The tour offers great value for money as you get to taste six drams at the end, including a sample of the new make spirit and a couple of single cask whiskies (one matured in a sherry cask and one from a bourbon). It later turned out that these two single cask whiskies were for sale and that you could bottle and label them yourselves! You have to pay of cause (slightly pricy at £60, we thought) but it was exceptionally good and enjoyable whisky, so we just had to do it! This tour was excellent with the jovial Dennis explaining everything in an entertaining and informative way. He also made sure that everyone was involved and understanding what was happening as we went along. This made the tour great for beginners and connoisseurs alike. We thank Dennis for his hospitality on the day and Phil Huckle of Pernod Ricard for arranging the tour for us. 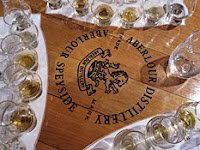 Tasting notes
Aberlour new make spirit - this had been distilled on the previous day and had an alcoholic strength of 69.5% ABV. The spirit is crystal clear with a clean crisp nose that is full of fresh green fruit (think of pears and apples). On the palate, these are joined by some sweet cereal notes and a punchy spiciness that is reminiscent of the heat produced by a red chilli. With water, the sweet fruit and grains really shine through with the spiciness dulling down a touch. It was great to get the opportunity to try the new make unaged spirit, as this rarely happens on tours.

Aberlour 14 years old bourbon cask - this is a first filled cask and was one of the two that you could fill to a bottle yourself. This cask strength whisky (63.1% ABV) has lovely sweet vanilla and butterscotch aromas on the nose. On the palate, this feels rich and creamy in the mouth with lots of vanilla and butterscotch again but also some coconut and other nuttiness (think of hazelnuts). The finish was quite dry and fresh. Adding water bought out the coconut particularly.

Aberlour 15 years old sherry cask - a lovely dram and the one that we filled to a bottle ourselves. This is 56.4% ABV and dark amber brown in colour. The nose is rich and full of dried fruit (imagine raisins), spices and dark chocolate. This richness is transferred to the palate, where it feels creamy and thick in your mouth. The combination of dried fruit, spices (think of ginger, cinnamon and nutmeg) and wood is lovely and is balanced by the slightly bitter chocolate element. The finish is long, woody and dry. The addition of water brings out the chocolate even more and just a hint of coffee?

Aberlour 10 years old - the distillery's flagship single malt and the one that recently kicked Glenfiddich off the number one spot in France. This is bottled at 40% ABV and the colour is amber. The nose combines caramel, butterscotch and dried fruit aromas with a touch of spice. The palate is sugary (think of that caramel again) and has lots of dried fruits (imagine sultanas and raisins), some cereal notes and that touch of spice again (think of cinnamon). The finish starts sweetly before turning dry and refreshingly woody. A lovely soft dram.

Aberlour 16 years old - this whisky is made up of 50% bourbon cask matured whisky and 50% sherry cask, which are then married together and matured for the last six months in sherry casks. The colour is dark amber and the nose is full of dried fruit (think of sultanas and raisins), wood and distinct citrus (imagine orange zest especially). On the palate, this feels viscous and creamy with elements of vanilla, dried fruit, spice (cinnamon and nutmeg with maybe a touch of clove?), citrus oil (especially orange again) and something waxy (like furniture polish or polished wood). The finish is long, sweet and full of honey, wood and fruity notes.

Aberlour A'bunadh Batch 25 - the final whisky in the dramathon. This batch was bottled at 60.4% ABV and it feels like it! The colour is a dark reddish amber and the nose is packed with expressive dried fruits (think of raisins and candied peel), sugary caramel and toffee, fresh fruit (especially green apples) and spicy woody aromas (imagine cinnamon bark). The palate combines all of these with some woody and peppery notes joining in. It feels thick, viscous and creamy. The finish sucks away that sweetness and is pleasantly dry and woody. With water, the sweetness, especially the caramel and toffee, are exaggerated.

A great distillery, indeed. This one is up there with the very best standard tours in Scotland with some extraordinary whiskies on show in utterly gorgeous surroundings. To think that some distillery owners won't let you step foot into their warehouses but you may sit and sip single malts in Aberlour's!