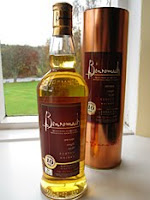 Benromach is the smallest working distillery in the Speyside region and is located to the north of the town of Forres. Infact, Benromach is one of the smallest distilleries in Scotland and only two people are employed to produce their spirit. The current annual production capacity is just 200,000 litres per year, although they can accommodate over double that capacity. The distillery was founded in 1898 under the name of Forres distillery. It became known as Benromach in 1919 and the current owners are Gordon & MacPhail, the independent bottling company based in nearby Elgin.

Gordon & MacPhail took control of Benromach in 1993 and they renovated the distillery as it had been mothballed for the previous 10 years by the previous owners (mothballing is the term used for the process where production is stopped at a distillery, but all the equipment remains intact and ready to go again). The distillery was re-opened by Prince Charles in 1998 and shortly afterwards Gordon & MacPhail embarked on an innovative programme of whisky production. This included different wine casks for finishing, heavily peating some of their malted barley (this is an usual practice for a Speyside distillery) and producing the world's first truly organic Scottish single malt whisky.

This 10 years old is a new release that only hit the shelves at the start of October 2009. It marks a milestone for Gordon & MacPhail as it is the first Benromach whisky that they have released with an age statement since they took over the distillery. The final whisky is made up of 80% bourbon cask matured whisky and 20% sherry cask matured, which are then married together and matured for the final year in sherry casks. We purchased our bottle on our recent trip to Speyside, when we visited the Gordon & MacPhail shop in Elgin. It will only be available in specialist whisky retailers and was at a special introductory price of £25 a bottle. The regular price will be around £30.

This Benromach 10 years old is golden in colour and has a surprisingly smoky nose. First comes some vanilla and toffee aromas before these give way to an earthy peatiness (think of damp moss or earth). These elements combine well and there is also some dried fruits (imagine sultanas) and something reminiscent of dried grasses. On the palate, this whisky is rich, full bodied and quite creamy with an initial hit of sweet malty cereal grains and vanilla. Then comes that smokiness again, although it is a bit more ashy/ember-like now. This remains a very pleasant surprise as smokiness is rare in Speyside whiskies. The cereal, vanilla and smoke mix perfectly with some further dried fruits (add some tropical dried fruits, like mango, to the sultanas here), buttery toffee and a hint of the dried grassiness. This feels thick in your mouth and is smooth and very well balanced. The finish is reasonably long with the creamy vanilla and sweet smokiness prominent.

Benromach is a very good new release and is one of our favourites of the year to date. It offers rich, classic Speyside characteristics but with the smoky twist. Having said that, the smokiness is not too overpowering and compliments everything else. A lovely dram and good value for £30 a bottle and even better value for £25!
posted by Matt C at 4:58 PM

I brought a bottle of this home from the Calgary airport and I'm looking forward to trying it next week at my scotch club. Thrilled to see you awarded it your whisky of the year! Will be sure to report back on my thoughts.