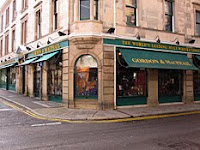 Gordon & MacPhail are a company based in the heart of the city of Elgin in the Speyside whisky region of Scotland. They continue to operate from their original premises that were constructed when the company was set up by James Gordon and John Alexander MacPhail in 1895. The company started off by bottling whisky for the numerous local distilleries and also did some blending and vatting. The business grew rapidly and they were soon joined by John Urquhart, whose family still own and manage the company today.

Gordon & MacPhail are one of the largest independent bottling companies in Scotland, with over 300 own label bottlings in their current catalogue. The whiskies are selected from most of the distilleries around Scotland and released in their 'Connoisseur's Choice' range. They also release a cask strength range and the 'Private Collection', a range of very limited edition whiskies. Gordon & MacPhail are different to most other independent bottlers as they get distilleries to fill new make spirit directly to their own supplied casks rather than buying ready filled and aged casks. They also own the local Elgin based Benromach distillery, which they purchased in 1993, renovated and then reopened in 1998. 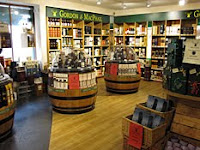 On our recent visit to the Speyside region, we stayed in Elgin and we just had to visit Gordon & MacPhail's legendary whisky shop that continues to draw whisky drinkers and visitors from around the world. The store is located on South Street and is split in to three main sections. As you walk in there is a well stocked wine section to your left and a food store to the right that stocks a selection of traditional and contemporary Scottish produce. This stretches back to a large delicatessen counter that houses a wide array of local meat, cheese and other produce.

We were there for the whisky though and the whisky section of the shop is tucked away in the back left hand corner. It is an absolute treasure trove of whisky with over 700 different ones jammed on to the shelves and in stock at any one time. At the heart of the stock is their own Gordon & MacPhail bottlings that are available in full or miniature size, some of which are available for tasting. The rest covers almost every distillery that you can think of, whether it be open or closed. The range is the biggest that we have ever seen in a shop and covers everything from the big household names and everyday whiskies to highly rare and collectable bottlings. It takes ages just to look at what is on the shelves and there is not enough hours in the day to digest it all. They also showcase the whiskies from their Benromach distillery - whilst at the shop we had the chance to sample the new Benromach 10 years old, which we will write a full review for shortly, and it was so good that we ended up buying a bottle. For further information on Gordon & MacPhail's shop and bottlings, then go to their informative website at www.gordonandmacphail.com.
posted by Matt C at 1:34 PM

Email ThisBlogThis!Share to TwitterShare to FacebookShare to Pinterest
labels: gordon and macphail, speyside