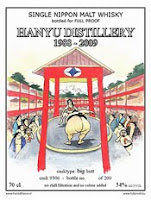 Hanyu is a Japanese whisky distillery that is no longer in production. The Tao Shuzo Company, who ran Hanyu, went bankrupt in 2000 and the distillery was dismantled in 2004. It was located in the town of Hanyu, to the north of Tokyo, and was founded in 1946 by Isouji Akuto. Akuto was the 19th generation of a famous sake producing family, who had originally started distilling sake in the 1690s. Hanyu produced sake until 1980, when the decision was made to start making single malt whisky in the Scottish style. This followed a boom in the whisky industry in Japan and in drinking imported Scottish and Irish whiskies.

Rise from the ashes
The success of Hanyu was relatively short lived, as financial problems began to surface in the late 1980s. The boom of the 1970s and early 80s was followed by a spectacular crash in the Japanese whisky industry, as cheaper imported whisky flooded the market. In 2004, Ichiro Akuto purchased approximately 400 casks of Hanyu whisky that were destined to be destroyed as part of the distillery's demolition. Ichiro is the grandson of the original founder of Hanyu, Isouji Akuto, and he subsequently established his own company called Venture Whisky. They have been bottling these rescued Hanyu whiskies since 2005 in a number of guises, including the award winning Ichiro's Malts series which are all named after different playing cards. Akuto has also founded Chichibu, Japan's newest whisky distillery, and it distilled its first whisky in 2008. 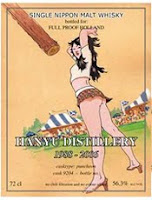 Interesting labels!
Big Butt is part of a limited series of single cask malts that have animated characters on the label, all with a buttock related theme. This one shows a sumo wrestler's backside (Big Butt ... do you get it?) and another one is Full Proof (pictured, left), which shows a Japanese girl in a skimpy, cheeky short skirt. This Hanyu Big Butt was distilled in 1988 and bottled at 21 years of age in 2009. There were only 200 bottles released, so we were very grateful to receive a small sample and try this rare dram from a distillery that we have not tried before. It has been matured in a large sherry cask (these are called butts, so we have another butt reference!) and is bottled at 54% ABV. These whiskies are bottled for the European market and cost €140 a bottle.

Our tasting notes
The colour of Big Butt 21 years old is a dark golden amber and the nose is intense and rich, with plenty of potent aromas coming through - toasted almonds, dried fruits (think of raisins, prunes and candied orange peel), brown sugar, cereal grains, dark polished wood, a whiff of sulphuric coal smoke and an extraordinary, almost overpowering smell of burnt popcorn. On the palate, this seems stronger than its 54% ABV and the alcoholic burn is slightly off putting. However, once this dies then other characteristics are allowed to develop. Initially, this offers some burnt sugar, slightly bitter cereal grains and lots of woody oak. These are balanced by some sweeter elements such as the dried fruits (the raisins and orange peel are particularly prominent), nuts (think of hazelnuts and almonds) and crumbly brown sugar. It coats your mouth and is rich and intense in nature. That sulphur smoke from the nose returns along with a ginger note. The finish is relatively short considering the richness of the whisky. It is woody and dry with the burnt sugar and popcorn taking over. The addition of water makes Big Butt a little easier to drink. Some of the initial bitterness is taken away and it becomes creamier and sweeter (imagine toffee or butterscotch) on the palate.

What's the verdict?
It is always interesting when you try a whisky from a distillery that you have not tasted before, and this is no different. Big Butt is intense and expressive with a number of unusual characteristics (especially the burnt popcorn note throughout). This comes across as a 'difficult' whisky and it is not the easiest to drink, especially straight. However, given time and a touch of water the elements start to loosen up but it still feels a little awkward. A very interesting dram that is unlike anything else that we have tasted to date.
posted by Matt C at 11:58 AM

OMG those japs. big butt.
not very PC i am afraid;)

how lucky of you to get to taste this expression.

I am pretty sure that these bottlings are in fact private casks that have been bottled by Full Proof Europe (couple of guys in Holland actually) these are not distillery bottlings hence the labels are by a local Dutch artist and represent a more quirky sense of humour.
I have a couple of the other bottlings from Full Proof but am yet to open them up.

My web site dedicated to the Hanyu's Playing Card Series is now updated with single pages for each of the 58 versions. See www.buxrud.se/webb/