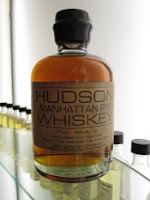 An old tradition reborn
Hudson Manhattan Rye is an American whiskey is made by Tuthilltown Spirits. They are located in the town of Gardiner in the state of New York, around an hours drive directly north of New York City. The distillery was opened in 2005 and is the first to produce whiskey in the state of New York since the Prohibition period, which was enforced between 1920 and 1933. Prior to Prohibition, the state was well known for its production of rye whiskies and from this the famous Manhattan cocktail was born.

The idea of two men
Tuthilltown Spirits takes its name from the old Tuthilltown grist mill (founded in 1788, it is the oldest water powered mill in the state of New York), where the distillery is housed. The Hudson bottling name is due to the fact that the distillery lies in the River Hudson valley. The company was founded by business partners Ralph Erenzo and Brian Lee and both are distillers at Tuthilltown Spirits. The distillery equipment was designed and built by Lee and Erenzo's son is the Brand Ambassador. Both are self taught distillers having toured various European distilleries, including Cognac and absinthe in France and grappa in Italy. For further information, please visit their website - www.tuthilltown.com - and watch the informative short film below.

Locally sourced ingredients
At Tuthilltown Spirits they produce a range of single malt, bourbon and rye whiskies, all of which have their own unique grain recipes. All the grain used in production comes from within a 90km radius of the distillery and the water and yeast used is also locally sourced. Their whiskies are produced in small batches and all bottles are hand filled, capped with a stopper, dipped in wax and then hand numbered with the year, batch number and bottle number. This Manhattan Rye is made from 100% whole rye grains and this makes it one of the few pure rye whiskies available. It is bottled at 46% ABV and costs $45-50 for a 375ml bottle. This bottle is labeled as Year 09, Batch 17, Bottle 250. We thank Lisa Huang for bring us this sample back from the USA.

Our tasting notes
The colour of this Hudson Manhattan Rye is a dark golden brown and the nose is very promising with a fresh vibrancy to it. Initially there are plenty of distinct grain and burnt woody notes and the graininess is reminiscent of a sourdough loaf. With a little time some further sweeter aromas start to come through and these combine well with the more bitter initial notes. There is sweet vanilla, coconut (think of dessicated coconut), something fruity (imagine orange zest or oil), some waxy furniture polish and a hint of yeast. On the palate, this whiskey is again light and fresh and has a distinct initial bitterness that grips the inside of your mouth (think of a combination of charred wood, cereal grain husks and wood spices, especially nutmeg). Then the sweeter characteristics start to show - sweet vanilla, honey, candied orange peel, coconut, almonds plus some cinnamon. The combination is simply lovely. The finish is short yet expressive with plenty of toasted almond and vanilla present. A charred woodiness is the last thing to appear and this leaves a pleasant bitterness in your mouth.

What's the verdict?
This whiskey is a gem and feels unique - both of us, and the person that we sampled it with, agreed that it tastes and feels like nothing else that we have tried for a long time. The reason is that is has a different flavour profile and structure to most American whiskies, bourbons or ryes, where the sweetness comes first and is then followed by some bitter notes. Here, this is in reverse with the bitterness up front followed by sweetness. Fascinating and enjoyable stuff that demonstrates the attention to detail that a small boutique distiller can acheive - a great dram.
posted by Matt C at 1:05 PM

here is my version :)
Manhattan surprise in San Francisco
http://livingwhisky.pixnet.net/blog

Thanks for the viedo. Now I know why I was impressed by that whisky. The passion from the marker is in it, and you can feel it...