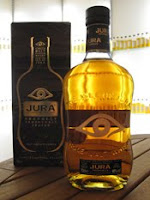 Welcome to deer island
The Jura distillery is located on the isle of Jura, which lies off the west coast of Scotland. The island's closest neighbour is the famous whisky island of Islay and they are seperated by a narrow, fast flowing stretch of water called the 'Sound of Islay'. The distillery was founded in 1810 by Archibald Campbell and was originally called the Small Isles distillery. It was closed for a long period between 1901 and 1960, at which point it was rebuilt and renamed as Jura. The distillery has a large annual production capacity (approx. two million litres), considering its remoteness and the small population of the island (currently 220 people). In fact, Jura translates as 'deer island' from the old Nordic language and the deer out number people by a ratio of 20:1!

A new addition to the range
The current owners are Whyte & Mackay and they use the whisky produced there in their popular range of blended whiskies but are also putting more time in to promoting Jura as a single malt whisky. This has seen sales improve greatly in the last two years and as a result they continue to expand the core range. They currently release a 10, 16, 18 and 21 years old in a lightly peated style plus the Superstition, which is an unaged and smokier and this Prophecy, which is 'profoundly peaty' (their words, not ours!). Jura is also popular with the independent bottling companies with different ages and casks available. The Prophecy was released towards the end of 2009 and is bottled at 46% ABV. It should cost £45-50 a bottle from specialist alcohol retailers.

Our tasting notes
The colour of the Prophecy is golden with a touch of coppery amber. The nose is vibrant with a rich mix of interesting aromas - caramel, dried fruits (think of raisins and orange peel), slightly sulphuric coal smoke, wood spices (imagine cinnamon and nutmeg) and a whiff of antiseptic surgical spirit. On the palate, this whisky is heavier and smokier than the nose suggests. It has an oily feeling in the mouth, with the smokiness more pronounced and up front than on the nose. This smokiness is also less coal-like and more reminiscent of a bonfire or bonfire ash. Through this come other elements that combine well - caramel sweetness (this is quite sugary initially before fading), fruits (the dried raisins and peel again), a distinct grassy herbal note (a combination of dried grass and a hint of liquorice), some wood spice (cinnamon and nutmeg) and some hotter spice (think of peppercorns and red chilli). The finish is long and lingering but is drier than the palate, with the smoky and herbal notes prominent and giving it a slightly acrid edge.

What's the verdict?
This is our favourite Jura whisky that we have tasted to date. Prophecy offers additional richness and increased smokiness to others in the range and would be a good alternative to the more well known smoky whiskies from Islay. The whisky improves with time, as we found it slightly harsh and acrid to begin with. Upon trying it a week or so later, it had softened and revealed more characteristics and it is these that we have written about above.
posted by Matt C at 3:25 PM

i've only tasted one Jura before. the Superstition...
i liked it, but not overwhelmed by it... i dont own any jura myself.

I'm looking forward to trying this. I rate the Superstition highly, although not a fan of the standard 10yo