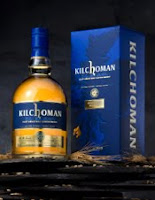 Islay's newest distillery
Kilchoman (pronounced kil-coe-man) is one of Scotland's newest whisky distilleries. It is located on the western side of the famous whisky island of Islay, which lies off the Scottish west coast. The distillery is named after a local church parish and is brand new - the first spirit was produced in June 2005. Kilchoman is independently owned by the Kilchoman Distillery Company and has an annual production capacity of around 100, 000 litres, making it one of the smallest distilleries in Scotland. It is already building up a cult following of whisky drinkers and attracts over 10,000 people a year to its visitor centre.

Superb reviews
The first official single malt whisky from Kilchoman was released in November 2009, once it had reached the legal age of three years and was allowed to be named as whisky. Prior to this, Kilchoman had released a series of bottlings of their new make spirit that had been aged between one month and two and a half years. This three years old has won rave reviews from within the industry, whisky writers and drinkers alike since its release. We have never properly sampled it, so thought that it was time to do so! Kilchoman 'Inaugeral Release' is limited to just 9000 bottles, has an alcohol strength of 46% ABV and should cost £45-50 from selected specialist retailers and www.kilchomandistillery.com.

Our tasting notes
The colour of this Kilchoman whisky is light, straw-like and golden. The nose has an interesting combination of vibrant freshness and rich smokiness - the aromas coming through include fresh green fruit (think of pears and apples), vanilla, citrus (imagine lemon zest), a hint of something savoury and meaty (think of smoked bacon) and plenty of bonfire smoke. On the palate, this feels sweeter and less savoury than the nose suggests. This sweetness has elements of honey, vanilla and icing sugar to it. These combine well with the slightly acrid but pungent peaty smoke (this feels slightly more ashy than on the nose) and the fresh green and citrus fruits - the overall feeling is clean and refreshing. The finish is long, vibrant and sweet with the vanilla and smoke prominent. The smokiness smolders away for ages in your mouth and turns a little dry right at the end.

What's the verdict?
Many well respected whisky writers have praised this Kilchoman 3 years old to the hilt and it has won a number of awards since its release. It is easy to see why - put simply, this whisky lives up to the hype. Considering its age, it has good balance, character and interest and smells, feels and tastes older than it is. It also exhibits great potential ... the question is, if Kilchoman is this good now then what will it be like when/if it fulfils its undoubted potential? This has to be tried, especially if you love your smoky whiskies.
posted by Matt C at 12:17 PM

Great notes matt.
what can i say, the 2nd and 3rd releases are much better due to the sherry finishes... i loved them. for a 3 yo it's amazing
i've reviewd the automn rel (2nd) and i am about to review all 3 together soon. that should be interesting.
didnt buy the 3rd as it's too similar to the 2nd...
here :