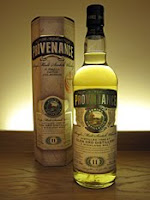 The Black Isle's distillery
Glen Ord is a little known but well regarded distillery in the north Highlands of Scotland. It is located in town of Muir of Ord, to the north of Inverness, in an area that is referred to as the 'Black Isle'. This name comes from the colour of the soil and its dark, rich earth makes it one of the most fertile farming regions in Scotland. The distillery was founded in 1838 by Thomas Mackenzie and was originally known as Ord. It was later known as Glenoran before becoming Glen Ord in 1923. The location was selected due to its proximity to the abundance of quality barley, dark peat and fresh local spring water.

Part of Johnnie Walker
Glen Ord is currently owned by the large drinks company Diageo and is one of their largest with an annual production capacity of three million litres. Despite this, it remains one of Diageo's least known distilleries. The main reason for this is that the majority of whisky made at Glen Ord is taken to be used in the owner's world famous Johnnie Walker blended range. While Glen Ord is relatively unknown in the UK, it remains highly regarded and its most popular markets are America and South East Asia. The distillery releases just two regular bottlings - a 12 years old and another 12 years old called Singleton of Glen Ord - although these are supplimented by occasional older limited versions. Independent bottlings are rare, which is why we had to try this release from Douglas Laing & Co.

Limited numbers
Douglas Laing & Co are an independent bottling company that are based in Glasgow and have been bottling whisky since 1948. They buy casks from different distilleries from all over Scotland and bottle them in a number of ranges. This whisky is from a range called Provenance and within this range everything is released at 46% ABV. This is bottled at 11 years of age (distilled 1998, bottled 2009) and is from just a single ex-bourbon cask, so the amount of bottles available is very limited. It can be found in selected specialist whisky retailers and should cost around £45 a bottle.

Our tasting notes
The colour of this Glen Ord 11 years old Provenance bottling is pale and golden, almost straw-like. The nose is fresh and zingy with plenty of fresh green fruits (think of pears and apples), alcohol spirit and citrus (imagine lemon) initially, before some richer aromas come through - gristy and yeasty cereals, toffee, vanilla and a touch of honey. On the palate, there is a distinct crispness up front before the characteristics begin to develop fully. All of the elements mentioned on the nose are present - green and citrus fruits, cereal grains, yeast, toffee, vanilla and honey - but they feel more exaggerated and fuller in their nature. The combination is pleasant with the vanilla, toffee and grains most prominent. As we move in to the finish, the grains become slightly more bitter (think of the husks especially). The finish is on the short side but remains fresh, crisp and zingy with a pleasant mouth watering sensation.

What's the verdict?
This whisky is light and feels slightly younger than it is. If you have ever tried new make spirit (the spirit that comes off the still and is then aged to become whisky), then elements of that are present. These elements normally mature and disappear with time. If you haven't tried new make spirit, then these elements are the distinct zingyness (sometimes being hot and spicy), as well as the presence of the fresh green fruits. On the other hand, it may be that the cask is a bit old and has not imparted as much influence on the whisky as expected. Having said all of that, this Glen Ord is a pleasant and refreshing dram and is worth a try, especially if you like lighter, aperitif style whiskies. It would be great on a warm day also.
posted by Matt C at 12:47 PM