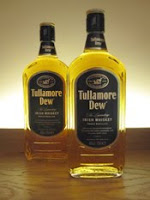 Owned by an innovator
Tullamore Dew is a multi award winning Irish whiskey. It was originally first distilled in the village of Tullamore, County Offaly in central Ireland in 1829. The Tullamore distillery was founded by Michael Molloy before passing to Daniel E. Williams in the 1880s. Williams had started working at the distillery as a teenager and had done almost every job there by the time he had worked his way up to the position of General Manager. He was a major innovator as well - he introduced electricity and the telephone to Tullamore village and its distillery, making it one of the most modern whiskey making facilities of the day. Williams also gave his name to his whiskey by combining the town's name with his initials, hence Tullamore DEW.

Tullamore Dew is the second best selling Irish whiskey in the world, with Jameson's in first place. This Original is triple distilled (as most Irish whiskies are) in copper pot stills, matured in ex-bourbon casks and released at 40% ABV. A bottle should cost around the £20 mark. It forms the backbone of the Tullamore Dew range, which also includes the sherry cask matured blend Black 43, 10 and 12 years old blends plus a 10 years old single malt. Tullamore Dew whiskey is also used within the popular Irish Mist liqueur, where it is mixed with herbs and honey.

New Irish distillery?
The Tullamore Dew brand has recently been acquired by the Scottish whisky company William Grant & Sons and is made at the Midleton distillery in County Cork, southern Ireland. Midleton were the previous owners of the brand and have agreed to distill the whiskey under license for the foreseeable future. Midleton took over the distilling of Tullamore Dew in 1965, after the Tullamore distillery closed and have produced it there ever since, along with other famous Irish whiskey names such as Jameson's, Powers and Paddy. It is rumoured that William Grant & Sons are planning to build a new distillery in Ireland, so as to produce the Tullamore Dew whiskies themselves.

Our tasting notes
The colour of this Tullamore Dew Original is a pale gold and the nose is light, fresh and zesty (think of lemon zest especially). There is plenty of oak and vanilla to begin with and these are joined quickly by some distinctive malty cereal grains and dried grasses (imagine hay or straw). Also evident are some pleasant wood spices (especially nutmeg) and an interesting doughy/ yeast note. On the palate this is again light, refreshing and zesty. It grows in richness as you hold it in your mouth with some lovely sweet elements combining well together - creamy vanilla, nuts (especially almonds), toffee and butterscotch. These are balanced by a good helping of bittersweet cereal grains, dried grasses and a pinch of wood spice (think of cinnamon and nutmeg). That yeast-like note comes through right at the end and carries through to the finish, which is short and sweet. The honey and vanilla are again prominent before the distinctive cereals come through to give the finish a drier edge.

What's the verdict?
This a good and simple whiskey that is worth trying if you get the chance. It would be particularly good for a beginner as it offers pleasant softness and smoothness, while having some interesting characteristics present. It could easily be mixed with something or would be great in an Irish coffee (they market it as such on their website!). An enjoyable and easy drinking dram that offers particularly good value for money.
posted by Matt C at 9:21 PM