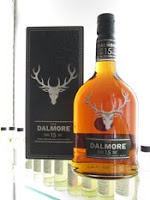 A Scottish Highland whisky
Dalmore is a distillery that is located in the northern Highland town of Alness. It is one of two whisky distilleries in the town, with the lesser known Teaninich being the other. Dalmore was founded in 1839 by Alexander Matheson and is currently owned by the famous whisky name of Whyte & Mackay, which is now a subsidiary of the Indian owned company United Spirits. United Spirits took over in 2007 and have since rebranded the Dalmore whisky range and packaging. They have also recently done this to the two other Whyte & Mackay single malts – Jura and Fettercairn.

Sherry cask maturation
Dalmore has an annual production capacity of around four million litres and has long been renowned for their use of sherry casks to mature their whiskies. The current core range reflects this and contains some of the best examples of whisky in the richer, sweeter style. They currently release a 12 years old, this 15 and an 18 years old in the core range. These are complimented by more expensive and limited releases, such as the MacKenzie and King Alexander III. Independent bottlings are on the rare side but they do offer a good way of buying older Dalmore’s at a decent price.

Our tasting notes
The colour of this Dalmore 15 years old is dark amber with an orange hue. The nose is rich and fragrant with plenty of sweetness evident. There is immediate caramel and treacle, which is followed by dark dried fruits (think of raisins, sultanas and dates), some distinct cereal grains, orange zest and hints of espresso coffee, cocoa and sulphur smoke. On the palate, the richness and sweetness continues with the whisky feeling thick and oily in the mouth. There is again plenty of caramel, treacle and dark dried fruits (the raisins especially) and these are backed up by some honey, a tangy orange zest note and the coffee and cocoa from the nose. These last two combine with some gristy cereal grains to give a bittersweet feeling towards the end, where some wood spices (imagine cinnamon, nutmeg and sandalwood) come through. The finish is long and rich, which begins sweetly with the caramel and dried fruit notes (especially some candied orange peel) prominent. It then becomes drier and woodier with the spices coming through well.

What’s the verdict?
The Dalmore 15 years old is a decent example of a rich, sweet sherry cask matured whisky. It would be great as an after dinner whisky or one to have with or compliment a cigar. The sweetness and richness may be too much or heavy for some, as these characters are slightly over exaggerated. The presence of the spicy and more bitter notes adds some balance but doesn’t quite go far enough in our opinion. A bottle should cost £40-45 from specialist alcohol retailers.
posted by Matt C at 4:55 PM

Good one.
the 15 is my favorite among all Delmore i had. (and recently the mackenzie).

lovely. you did not mention that the dalmore 15 is essentially a vatting of 3 different types of sherries married together.