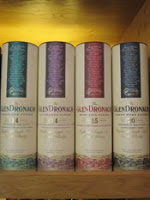 The Glendronach distillery (pronounced glen-dron-ack) is located close to the town of Huntly, at the far south eastern tip of the Speyside whisky region in Scotland. The distillery was founded in 1826 by James Allardes and later went on to become an important part of the William Teacher & Sons empire. By the 1960s, most of the whisky produced at Glendronach was being used within the popular Teacher's blended range of whiskies. The distillery is relatively small with an annual capacity of 1.4 million litres and was the last distillery to use coal fires to heat its stills. The use of this traditional heating method died out when Glendronach's stills were converted to steam heating in 2005.

New independent owners
In 2008, Glendronach was given a new lease of life, following a period of closure by previous owners Pernod Ricard. The distillery was taken over an independent company called The Benriach Distillery Company Ltd, who are the innovative owners of another Speyside distillery at Benriach. They immediately made a decision to expand the range of Glendronach whisky that previously contained just a 12 years old and a limited edition 33 years old. They found sufficient maturing stock to add a 15 and an 18 years old to the range and these were released in mid 2009. Within the two years since the takeover, awareness of Glendronach as a single malt whisky has grown massively and sales have reflected this by growing tenfold.

Expanding the range
The plan of The Benriach Distillery Company Ltd is to continue increasing the popularity and availability of Glendronach and capitalise on the world's current trend for quality single malts. The first stage of this has arrived in the form of four cask finishes - two 14 year olds (one Sauternes finish and one Virgin Oak finish), a 15 years old Moscatel finish and a 20 years old Port finish. Each has been matured in ex-sherry casks for the majority of its life, before being transferred in very small batches to the different named casks. The exception is the Virgin Oak which has been in charred ex-bourbon casks for most of the time, before moving across to a small batch of fresh, new American oak casks.

Details of the whiskies
Each whisky is bottled at 46% ABV and are available now from specialist retailers. The two 14 year olds should cost £40-45 each with 4584 bottles of the Sauternes finish (a sweet French dessert wine) and 5760 bottles of the Virgin Oak available. The 15 years old Moscatel finish (another sweet French dessert wine) has 3240 bottles available and should cost around £45-50, with the 20 years old Port finish (a fortified wine from Portugal) having only 2052 bottles released at around £65-70 each. We have been lucky enough to sample two of this new range today, so here goes ... 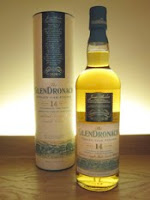 Glendronach 14 years old Virgin Oak
The colour is yellow gold and the nose is packed with intense characteristics. There is plenty of vanilla and oak present and these are backed up by notes of nuts (think of coconut and almond especially - the combination of the almond and vanilla is a little reminiscent of marzipan), oatcake biscuits, butter and a hint of burnt sugar or caramel. On the palate, this whisky is full bodied with a nice texture and feels thick and syrupy in the mouth. It is initially sweet with a good richness and intensity and this is led by the vanilla and oak again, with further sweetness added by a note of golden syrup. With time, other notes begin to develop - a distinct tropical fruitiness (imagine dried mango and apricot, with plenty of coconut), some oat-like cereal grains and a whiff of charred woody smoke. The finish is shortish and starts with some sweet honey and vanilla notes before more bitter, with the burnt sugar and charred wood elements from before coming through. In the end, this whisky is quite dry, woody and spicy (think of cinnamon bark).

Glendronach 14 years old Sauternes
The colour is a light gold and straw-like. The nose is very expressive and perfumed with honey, vanilla and sultana notes up front, followed by a floral character reminiscent of something like honeysuckle or orange blossom. Then things start to change and become even more interesting - a distinct whiff of custard powder and a lovely, but strange, combination of fruits appear, some of which we have never experienced in a whisky before - imagine gooseberry, rhubarb, grapefruit zest and dried apple. It makes you want to dive in and try. On the palate, this is sweet, creamy and rich with a viscous feeling in the mouth. There is plenty of sweet honey, vanilla, sultanas and custard powder with the note of grapefruit adding some balance with some zing and bitterness. The 'unusual' fruits of the nose are detectable, although less evident than on the nose. The same goes for the floral notes. The finish is again sweet, rich and long with some further citrus zestiness giving superb balance.

What's the verdict?
Both of these are very good whiskies. The Virgin Oak is a good example of a bourbon cask matured whisky and offers something different in a Glendronach range that is well regarded for its use of ex-sherry casks. The Sauternes finish is an unusual but highly enjoyable whisky. We say 'unusual' because of those fruity characters that we have not previous experienced in a whisky, such as gooseberry and rhubarb. It may be too sweet for some but we think that its refined nature and almost perfect balance make it a winner. A cracking dram.
posted by Matt C at 11:52 AM

nice nice!
how do u compare this Sauternes with the nectar d'or?