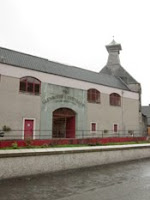 Glenrothes is located in the town of Rothes in the centre of the Speyside region of Scotland. The distillery was founded in 1878 by Stuart & Co. and since the early 1990s has been owned by Berry Brothers & Rudd, the famous London wine and spirits merchants. They signed up to distribute Glenrothes as a single malt whisky, in return for the use of the whisky in their popular Cutty Sark blended whisky range. They introduced the current vintage system for Glenrothes single malt whisky and in 1999 were joined by the Edrington Group in partnership. The range of Glenrothes single malts continues to grow under this ownership and the distillery still provides the signature whisky for the Cutty Sark range.

For further information on Glenrothes, its history and its whisky, please visit www.theglenrothes.com.

Glenrothes is not open to the general public, so when we got the opportunity to visit it was one that we had to take. Our tour was taken by Eric Jefferson, a local Rothes man and former distillery employee who now takes invited guests around Glenrothes. Eric was full of facts and information, plenty of which is included below, and we thank him for this and for his time to show us around.

We begin at Rothes House, which sits on a hill over looking the town of Rothes. The house was built in the 19th century and was the residence of the priest of Rothes. It was so positioned, to allow the priest to look over his parishioners. The house remained used by the church until the 1980s, when it fell in to disrepair. Berry Brothers & Rudd purchased it from the church in the 1990s, fully renovating it and Rothes House is now used to accommodate guests of the company. The distillery is accessed from the house via a leafy woodland path, which was packed with autumn colour and very pleasant despite the rain! 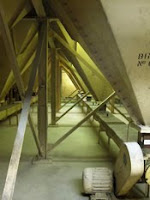 Upon arriving at the distillery, we head out of the rain and in to the milling area. First up was a room where the malted barley is delivered and prepared for milling. This room is full of silos (pictured, left)and here the grain is stored until it is moved to the milling room next door. The milling room is home to a Porteus Mill, which has been at Glenrothes since 1964. This machine can mill a staggering 5.1 tonnes of malted barley at a time. Eric explained to us about the milling process and the balance of the final grist that they need for the whisky making process. The grist contains constituent parts – husks, centres and flour. Each part contains soluble sugars that are used in the following mashing process. An incorrect balance of each will create problems in the next mashing stage.

We moved through the next room, which housed one large stainless steel mash tun. Here, the prepared grist is mixed with warm water and the soluble sugars in the grist are drawn out in to the water. This creates a sugary, malty solution that is reminiscent of a malt extract drink. Eric explained that during the mashing process they mix the grist with water at different temperatures in order to extract the highest amount of soluble sugars possible. The warm water is added, mixed and allowed to steep before the resulting solution is drained off. The process is then repeated, twice more with the temperature of the water increased each time. This pulls more and more of the sugars out. 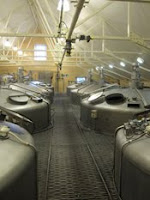 Next, is the impressive area where the fermentation part of the process takes place. Here, the yeast is added to the sugary solution (called 'wort') and these sugars are turned in to alcohol. Glenrothes has 18 fermentation tanks, which are called 'washbacks'. These are split between two rooms - eight stainless steel washbacks are in one room (pictured, left) and 10 wooden ones are next door. The wooden ones are made from Oregon pine and this arrangement makes Glenrothes one of the few distilleries in Scotland to have both stainless steel and wooden washbacks. Each washback can hold 25,000 litres and the yeast is left to do its work for 55 hours. This is slightly longer than most other distilleries in Scotland and the result is called 'wash' and is an ale-like liquid that has an alcohol level of 8% ABV. Each washback contains fermenting wash at different stages of the fermentation cycle, so as to maintain a constant supply.

The stillhouse at Glenrothes is known as the 'Cathedral of Speyside' due to the size of its stills. It is the tallest stillhouse in the Speyside region and houses 10 stills that work in pairs - five wash stills and five spirit stills - to produce Glenrothes' clean and fresh new make spirit. The stills are made of copper, as it can withstand the high temperatures needed to distill the spirit. The use of copper is vital as it also removes numerous impurities from the final spirit. Unusually, the lyne arms (the horizontal part at the top of the still) are pointing in towards the centre of the still house, where they are each linked to a condenser. This condenser is where the alcohol vapours are returned to a liquid form and collected. Traditionally, the lyne arms at most distilleries are pointing towards or going through the outer walls.

The fermented wash goes first through the wash still before the desirable parts are passed through the spirit still. Glenrothes has a longer distillation time than most other Scottish distilleries - 16 hours. They also collect a smaller percentage of middle cut or 'heart' of the spirit than most, with only 17% collected to be matured in to whisky. An interesting statistic that Eric told us was that 25,000 litres of wash (the capacity of each washback), will go on to produce just 2,800 litres of new make spirit. This new make spirit is filled to casks at a strength of 69.8% ABV and then matured in one of the four warehouses at Glenrothes. The annual production capacity of the distillery is 5.5 million litres. 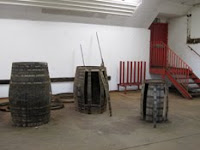 After a look in one of the warehouses, we move to the small cooperage that operates on the site. This is another feature that makes Glenrothes almost unique, as very few distilleries have their own cooperage attached nowadays. Most buy their casks from independent coopers. We observed two of the coopers at work, as they repaired some damaged casks and Eric told us a couple of interesting facts - the casks have curved edges so that they can be rolled and moved around more easily, plus a cask when filled with whisky weighs in excess of half a tonne!

Finally, we went to meet Ronnie Cox, the legendary Berry Brothers & Rudd Brands Heritage Director, for a tasting of some of the Glenrothes whisky range. This was held in The Inner Sanctum, a special tasting room located in the heart of the distillery. This was fantastic end to a great distillery tour and the tasting notes, plus some of the interesting facts that Ronnie shared with us - click here for our tasting notes from this session.
posted by Matt C at 10:04 PM

Very nice!
I like the fact that you decided to expalin the procees of the making as part of the visit to the distillery, but wish you had wrote more about the distillery visit experience - how it was for you etc.

Thanks for the post, I think I'll direct to it whisky newbie friends who want to learn about the process of whisky making in an easy welcoming way!