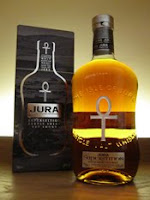 The Jura distillery is located on the isle of Jura, which lies off the west coast of Scotland. The island's closest neighbour is the famous whisky island of Islay and they are seperated by a narrow, fast flowing stretch of water called the 'Sound of Islay'. The distillery was founded in 1810 by Archibald Campbell and was originally called the Small Isles distillery - this name came from the numerous small islands that are located in Craighouse Bay, which the distillery overlooks. It was closed for a long period between 1901 and 1960, at which point it was rebuilt and re-named as Jura by Charles Mackinlay & Co.

Welcome to deer island!
The distillery has an annual production capacity (approx. two million litres), which is reasonably large when considering its remoteness and the small population of the island (currently only 220 people). In fact, Jura translates as 'deer island' from the old Nordic language (in ancient times the island was invaded by Nordic warriors, in case you were wondering about the connection!) and the deer out number people by a ratio of 20:1. The current owners are Whyte & Mackay, which is a subsidiary of the Indian drinks company United Spirits, and they use the whisky produced at Jura in their popular range of blended whiskies. However, they are recently putting more time in to promoting Jura as a single malt whisky. This has seen sales improve greatly in the last two years and as a result they continue to expand the core range.

Jura's expanding range
The current range consists of 10, 16, 18 and 21 years old in a lightly peated style plus this Superstition, which is smokier, and the relatively new Prophecy, which is 'profoundly peaty' (their words, not ours!). These are supplemented by occasional releases of older whiskies, such as the 1974 Vintage and the 40 years old. Jura is also popular with the independent bottling companies with different ages and casks available. Superstition is made by marrying (or mixing) two different styles of Jura whisky together - one heavily peaty and smoky and one very lightly peaty. It is bottled at 43% ABV and is available in specialist retailers and some larger supermarkets. A bottle should cost £25-30.

Our tasting notes
The colour of the Superstition is golden with an amber tint. The nose offers its peaty smokiness immediately - this has a feeling of damp earth and moss, with some wet grass thrown in. Then the other notes start to appear to make this whisky a little more balanced. There is a heavy whiff of robust cereals (think of oat cakes or biscuits), some nuts (imagine almonds), vanilla, caramel and a distinct hint of orange oil. The nose begins in a one dimensional way and becomes more and more interesting with time. The same happens on the palate - the peat smoke kicks things off and feels heavier than the nose suggested, but retains its slightly bitter damp earthy, mossy, grassy character. This is joined by sweeter vanilla, honey, oats, that orange oil and toasted/roasted almond notes - the combination is very pleasant and well balanced. Further complexity is added with late notes of baking spices (think of cinnamon especially), some burnt caramel and iodine (these add a good bitter edge) and a tiny tang of salt. The finish is not as long as expected but begins with the sweeter notes (especially vanilla and honey), before turning drier with the cereals and spices making it drier. The peat smoke remains throughout and fades away fairly quickly.

What's the verdict?
Jura Superstition is a good whisky to introduce someone to the peaty and smoky characters and flavours. It has them but not in a way that is too overpowering, robust or challenging. The subtly of the smoke combines with the other interesting characteristics to give a final whisky that is complex, balanced and easy drinking. It also offers decent value for money. A very pleasant dram.
posted by Matt C at 12:04 PM

i tried it yesterday for the first time.. Though a loyal cust. of jack daniel & Black Dog, i really liked it.. smooth and perfect... :) A nice whisky for a good date....

Not at all bad. I like the 16yo very much and had expected this to be a cheaper less rounded whisky, but no - full flavoured, still plenty of peaty taste and very mellow - a good drinking whisky. I'd recommend it.