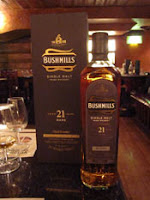 Bushmills holds the oldest distillery license in the world and this dates back to 1608. The distillery is named after the town of Bushmills in which it is located and lies close to the northern County Antrim coast in Northern Ireland, just two miles from the famous Giant’s Causeway. Global drinks company Diageo are the current owners and sales of the Bushmills whiskey range had plummeted before they took over in 2005. Now sales are growing rapidly following a sustained promotional campaign. The distillery is once again running at full capacity (approximately three million litres per year) to meet current demand. In addition to being the oldest licensed distillery in Ireland and the world, Bushmills also has the longest continually used logo. In 1784, the pot still logo was introduced in order to celebrate the formal registering of the distillery and this is still in use today, 226 years later!

Bushmills’ whiskies are all triple distilled in the traditional Irish way and the core range is a mixture of single malts and blends - the 10 years old and 16 years old are single malts, with the Original and Black Bush being blends. These are occasionally joined by special limited releases, such as this 21 years old. The 21 years old is an annual bottling, which was first released in 2001, and this year's release is limited to just 6,000 bottles. About a third will be allocated to the USA market, with the remainder shared between France, Ireland, the UK and the rest of Europe.

This 2010 release has spent its first 19 years maturing in a combination of ex-bourbon and ex-sherry casks, before being transferred for the last two years in to ex-Madeira casks. It is positioned at the top of the Bushmills range, both in price (recommended price is £120) and age. We were delighted to be invited to the UK launch, held at the Waxy O'Connor's pub in central London, where the Bushmills Master Blender Helen Mulholland opened bottle number 0001 of the 6000 for the assembled crowd to taste.

Our tasting notes
This 21 years old 2010 release is bottled at 40% ABV and the colour is golden amber. The nose is fresh and fruity, with plenty of dried fruits immediately present (think of raisins, sultanas and apricot). These are backed up by distinct malty cereal notes, some toffee and caramel aromas, and then something nutty (imagine toasted almonds) and some baking spices (especially cinnamon and nutmeg). On the palate, this whiskey feels incredibly soft and pleasantly coats the inside of your mouth. There are notes of distinct, almost sugary, sweetness (think of toffee and caramel again) and plenty of malted cereals, reminiscent of a robust biscuit like an oatcake. Then come some of the other characteristics from the nose - the dried fruits (especially raisins), toasted almonds and baking/woody spices. The overall combination of notes reminded us of Christmas pudding or rich fruit cake. A hint of dark chocolate develops right at the end. The finish is again initially sweet with that chocolate note coming through more prominently, before becoming incredibly spicy and drier - think of those woody baking spices again (cinnamon and nutmeg) plus a hint of clove.

What's the verdict?
This Bushmills offers a lovely dram of whiskey that gives a good mix of sweetness and spices. The aromas on the nose and flavours that come through on the palate are particularly good, with an interesting and excellent complexity. The finish is not quite to the same standard but still enjoyable, although it may be too spicy for some. Overall, this version of the 21 years old is a deliciously rich and pleasant whiskey that is well worth trying, if you get the chance.

At the same event, we had the opportunity to speak with Helen Mulholland - the Master Blender at Bushmills. We thank Helen for the time that she spent with us, on what was a busy evening for her. To read about what she had to say about Bushmills distillery and its whiskey - click here.
posted by Matt C at 8:03 PM