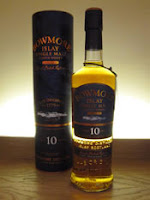 One of Scotland's oldest
Bowmore distillery is located on the western Scottish island of Islay, which is famous for producing the smoky, peaty style of whisky. It was founded in 1779 by John Simpson - this makes it the oldest of the eight distilleries currently operating on the island and one of the oldest in Scotland (only Glenturret in the Highlands is older, having started production in 1775). It is located on the shores of the large inland sea loch of Loch Indaal and the name of Bowmore translates as 'sea rock' from Gaelic. The distillery in currently owned by Morrison Bowmore, a subsidiary of the Japanese company Suntory, who also own the other Scottish distilleries at Auchentoshan and Glen Garioch. Bowmore has an annual production capacity of two million litres and is one of the biggest selling single malt whisky brands in the smoky, peaty style.

Details of Bowmore Tempest
The Tempest is a small batch bottling and it is planned that a new batch is released approximately twice a year – Batch 1 (of which our sample is from) was released in early 2010, with Batch 2 coming in mid 2010 and the next batch penciled in for release in early 2011. Batch 1 was matured exclusively is specially selected first fill ex-bourbon casks and a small amount of these were mixed together to create the final whisky. It is bottled at 10 years of age and has an alcoholic strength of 55.3% ABV. Both Batch 1 and 2 retailed in specialist whisky stores for around the £40-45 mark. We thank Cara Laing of Morrison Bowmore for our sample of Tempest and for her time spent talking about the bottling with us.

Our tasting notes
The colour of the Tempest is vibrant gold and the nose is a wonderful combination of sweet and smoky aromas. The sweetness has elements of caramel, butterscotch, marshmallow, malty cereals and dark dried fruit (think of raisins especially) to it, while the smokiness is a mix of a bonfire and damp, earthy moss. There are also hints of vanilla, dried orange peel and a woody spiciness that becomes more vibrant with time in the glass. On the palate, this feels instantly creamy and rich with a prominent sweet butterscotch note hitting first. Then come more savoury notes of the mossy smoke, wood spice and a hint of salt. Further sweetness is introduced as other characteristics develop – some vanilla, honey, toffee – but these are balanced by the smokiness, spiciness and tangy citrus (more like orange zest this time). The finish is very long and particularly smoky, with a distinctly bitter hit of iodine adding further complexity to the many other notes present from the palate.

What's the verdict?
This Bowmore Tempest is an exceptionally good whisky that is way too easy to drink! It is very accessible and this is demonstrated by comments from two people that we have shared a dram of it with. The first is just starting to try ‘proper’ whiskies (as he describes it!) and said that it was the best whisky that he had ever tasted. The other, who doesn’t like the smoky style of whisky, confessed that he really enjoyed it and that it was the sort of smoky whisky that could make him change his mind. This is one of our favourite whiskies of the year - we highly recommending finding a bottle and parting with your hard earned cash. We can’t wait to see what the next release of Tempest will be like …
posted by Matt C at 9:47 PM