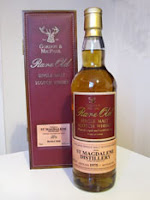 St. Magdalene is a Lowland distillery that has been closed since 1983. The distillery originally opened in 1795 in the town of Linlithgow, which lies between Edinburgh and Stirling, and whisky distilled at St. Magdalene is also occasionally released under the name of 'Linlithgow'. It was one of Scotland's oldest distilleries until its closure. St. Magdalene was regarded as having one of the most perfect locations in Scotland for both whisky production and transportation links, being situated very close to some of the main barley growing areas, the main Edinburgh to Stirling road and the Union canal. The distillery buildings are still standing and have been sympathetically renovated into apartments.

A rare single malt
St. Magdalene and Linlithgow whiskies are now extremely rare and are naturally running out, so are highly sought after by drinkers and collectors alike. The majority of the remaining dwindling stock is owned by drinks giant Diageo, who occasionally release special bottlings. The rest of the stock is held by independent bottling companies, who carefully select when to release it. This one is released by renowned independent bottling company, Gordon & MacPhail, in their Rare Old series. It was distilled in 1975 and bottled in 2005 at 30 years of age. Bottles can be found at specialist whisky retailers and should cost around £125 - this is a bargain considering the age and rarity of this whisky.

One of Scotland's oldest independent bottlers
Gordon & MacPhail are a company based in the city of Elgin in Scotland and they continue to operate from their original premises that were constructed when the company was set up by James Gordon and John Alexander MacPhail in 1895. The company started off by bottling whisky for the numerous local distilleries and also did some blending and vatting. The business grew rapidly and they were soon joined by John Urquhart, whose family still own and manage the company today. Currently, Gordon & MacPhail are one of the largest independent bottling companies in Scotland, with over 300 own label bottlings in their current catalogue. The whiskies are selected from distilleries all around Scotland and released in a number of ranges.

Our tasting notes
The colour is golden with a hint of amber and the nose is captivating and very promising. The combination of attractive and aromatic notes is alluring - lots of vanilla and cereal grains up front, followed by aromas of honey, toffee, orange peel, dried grasses, a hint of ginger powder and a deep scent of very ripe pears. On the palate, this whisky is soft, silky and slightly oily in feel. It grips your palate with fairly robust and malty cereal notes to begin with. Then come some lovely soft oaky flavours, plus notes of vanilla, honey, butterscotch, demerara sugar and lots of dried pear. These are balanced by hints of wood spice (imagine cinnamon, nutmeg and ginger), some tangy citrus zest (think of lemons especially) and some dried grassy notes, which add a pleasant bitterness and balance. The finish is long, soft and warming with plenty of cereal grain notes again, honey, vanilla and a dash of that ginger powder. Delicious!

What's the verdict?
This is a fabulous whisky that has plenty of subtle yet complex characteristics. It is well balanced and shows how good older whiskies can taste if matured sympathetically in quality casks. A big well done to Gordon & MacPhail for this excellent release. However, it does create a bittersweet dilemma - do you mourn the fact that whisky from a distillery that produced this sort of quality will soon run out or celebrate the fact that such great stuff is available, even for a limited period? We say, if you haven't tried any St. Magdalene whisky yet then you must do before it's gone forever.
posted by Matt C at 11:26 AM

The price seems fair to me and your notes sound really delicious...

I was born in1975 and bought a bottle of this for my father's 60th b'day a couple of years ago. It tastes at least as good as your description and I couldn't agree more that it's well worth cracking one of these open if you're lucky enough to track one down. Great review.