The Macallan Masters of Photography 2010/11 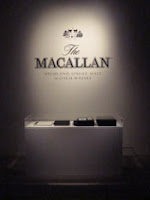 At the start of December, we were delighted to be invited to the UK and world launch of the Macallan Masters of Photography. The event was held in the gallery spaces of famous art auctioneers Phillips de Pury & Co. in central London. This is the second incarnation of the Masters of Photography concept by Macallan, who select a premium single malt whisky from their famous Speyside distillery warehouses and a series of photographic images by a famous Scottish photographer, before launching them together. In 2008, the first in the series paired a special 30 years old whisky with images by Rankin. Now, the collaboration is with the world renowned Albert Watson. The US launch is on 20 January.

Macallan is one of the most famous whisky distilleries and brands in the world. The range of single malt whisky from Macallan is extensive and are some of the best selling around the globe - it is consistently in top three for sales of single malt, with particular strong performances in the American, UK and travel retail markets. The Macallan distillery is located close to the village of Craigellachie in the heart of the Speyside region of Scotland and overlooks the River Spey. It was founded in 1824 by Alexander Reid and was originally called Elchies distillery, after an area of land nearby. The name was changed to Macallan in 1892 following a change of ownership. For further information on Macallan, please visit www.themacallan.com.

Albert Watson is one of the most influential photographers of the last 40 years. In a prolific career he has produced many memorable portraits of leading figures including Alfred Hitchcock, Mick Jagger and Kate Moss. He is also well known for his work in high fashion and has produced many cover shots for glossy magazines such as Vogue, Harper’s Bazaar and Rolling Stone. In addition, Watson has also directed over 500 TV commercials, had many solo shows exhibiting his work, published several books of his photographs and produced numerous iconic movie posters such as Kill Bill and Memoirs of a Geisha. He has also been voted as one of the Top 20 most influential photographers ever by Photo District News. For more information and to view some of his stunning images, go to www.albertwatson.net. 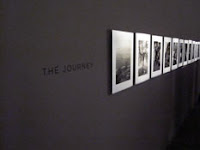 The concept behind the series of photographs is the journey of the wood that helps to flavour Macallan’s whisky. Watson, plus two models, started their journey in the forests of northern Spain where the European oak trees grow and then followed the wood through the whole process – the local timber yard, cooperage, Gonzalez Byass bodegas in Jerez where the sherry is made, sherry maturation, transportation to Scotland and finally, the Macallan distillery in Speyside. While the main focus is on the wood itself and its role in the whisky making, Watson conveys this with the use of the models, the dramatic Spanish and Scottish landscapes and the characters met along the way. As both of us are students of photography, we were impressed how much was conveyed through attention to detail, extraordinary use of light and sympathetic printing. 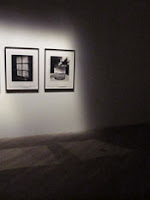 Macallan are running a competition in conjunction with the launch of the Albert Watson Masters of Photography series. All you need to do is to send them one of your own photographs – the theme is ‘great journeys’ – and the top 10 entries will then be voted for by the general public. Albert Watson will pick the his top three from these and award the prizes. These include a 10 day photographic trip to Scotland and master class with Albert Watson, a selection of Nikon cameras and subscriptions to Digital Camera magazine. For further information, visit the website above. Visit www.themastersofphotography.com to enter and the closing date for entries is 30 June 2011.

There are two whiskies that are being released in this Masters of Photography series. The first is a Macallan 20 years old that has been matured in Oloroso sherry casks. There are only 1000 bottles of this available and each comes in a presentation case with a specially commissioned book containing Albert Watson's Masters of Photography series of photos. It is bottled at 43% ABV and they will retail at specialist whisky stores for around £700 each. The second is the Macallan 1946, of which there are only 36 bottles released from a specially selected premium sherry cask. Each bottle comes with a one-off platinum photographic print signed by Albert Watson and will be sold with a reserve price of £10,000! 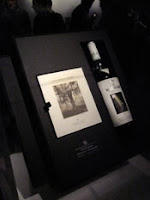 Macallan 20 years old > Our tasting notes
We were delighted and privileged to be able to sample this exclusive and rare whisky. The colour is a dark golden amber with a hint of red vibrancy to it. The nose is expressive and full of wonderful, rich aromas - dark dried fruits (think of prunes, figs, raisins and dates - essentially we are talking fruit cake/Christmas pudding), caramel, butterscotch sauce, plenty of spicy wood (imagine cedar wood, cinnamon and nutmeg - the feeling is like polished antique furniture), vanilla and burnt/spiced orange peel. The combination and balance is lovely. On the palate, there is initial sweetness with notes of vanilla, honey and caramel. Then come the darker notes - think of molasses, the dark dried fruits from the nose (especially fig with some cinnamon, which reminded us of panforte cakes from Tuscany), candied and spiced orange peel, coffee, a hint of dark chocolate and some bitter woodiness. The finish is slightly shorter than expected but good. The sweeter notes disappear quickly to leave lovely, warm cocoa, bitter chocolate and cinnamon notes.

What's the verdict?
This is a delicious and well produced whisky - the nose is excellent, the palate very good and the finish is decent but lets the whole whisky down slightly. Otherwise, it offers plenty of rich, warming characters and these are well balanced. Is it worth £700 a bottle? Only you can really decide that!
posted by Matt C at 10:30 PM