Welcome to Inbox - our weekly round up of whisky news and PR type material that has recently found its way in to our email inbox. It was created as we cannot write full articles or do justice to every piece that we receive. It features items from around the world of whisky and is published by us each Friday. Within Inbox we will write a few lines detailing each press release/piece of news/PR event that we have received and provide links, where possible, for you to find out further information if you want to. So here we go with this week's offerings - you may notice that there is a bit of a Christmas theme ...

Glayva > Give 'The Best' gift 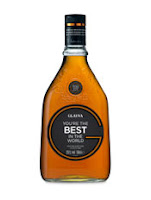 The popular and award-winning Scottish whisky liqueur brand has teamed up with The Whisky Shop - the UK's largest whisky retail chain - to produce a special limited edition label for the Christmas market.  The Glayva 'You're the Best' range is exclusive to The Whisky Shop and and only 150 bottles have been produced.  These carry one of three messages - 'You're the Best in the World', 'Best Mum' or 'Best Dad'.  Glayva has won more major awards than any of its competitors and is made from a combination of whisky, citrus fruits, heather honey and cloves. A 50cl bottle will cost £19.99 and they are available in one of the chain's 17 stores or online at www.whiskyshop.com.

The famous Speyside distillery of Glenlivet has announced the latest whisky in their Cellar Collection series of bottlings.  The series highlights exceptionally rare or old casks within Glenlivet's warehouses.  The first single malt in this special series was released in 2000 and this is the ninth such bottling.  This expression was distilled and filled to casks in 1980 and has been constructed from just three specially selected ex-bourbon casks from the legendary Cellar No.1 at the distillery.  These were hand picked by Distillery Manager Alan Winchester.  It was bottled in August at the natural cask strength of 43.3% ABV and there are just 500 bottles, each of which will cost £1000.  The 1980 Cellar Collection will be available in the travel retail/Duty Free market, plus south east Asia and Portugal. 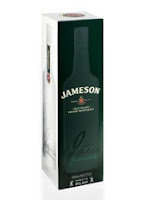 Jameson, the world's favourite Irish whiskey, has launched a festive gift box for the Christmas period.  The regular Jameson blended whiskey is being backed up by a 'Perfect For Christmas' campaign.  The new modern presentation packaging has green front and rear faces, with the side faces and top in white.  It is available in major supermarkets, specialist retailers and off licenses with a starting price point of £19.99.  Brand Ambassador and mixologist Ed McAvoy has also created a number of mixers and cocktails using Jameson whiskey, which can be found on their Facebook page. For further information on Jameson, or to become a 'fan' on Facebook and see what Jameson has planned over the coming months, go to www.facebook.com/jamesonwhiskey. 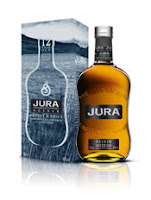 This week has seen the release of a new single malt expression in to the popular island distillery of Jura's core range.  Named Jura Elixir, the whisky is getting a 'soft' pre-Xmas release - this sees it being bottled in the half-bottle 35cl size.  The new whisky has been produced to be 'fruity and spicy' and takes its name from the fresh local water, which the islanders call the 'elixir of life' and was believed to have been blessed by St. Columba in 560AD.  It is this water that is used to make whisky at the distillery. Jura's Distillery Manager comments, “There’s something special about how whisky compliments the bracing cold of winter, and the Elixir’s fruitiness and spicy tones make it an ideal companion for the festive period". The Elixir will cost £16.49 and will be exclusively sold in stores of Sainsbury's, the major UK supermarket chain, from today.

posted by Whisky For Everyone at 8:40 PM

I agree with Jura's comments about winter and whisky. Whisky -is- the perfect Xmas gift in cold Scotland where I live.