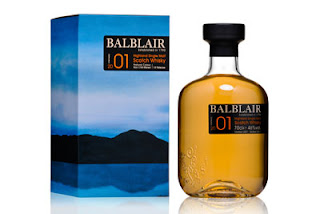 The 2001 version of Balblair is the latest in a line of Vintages released by the Highland distillery - a range of single malt whiskies which are specially selected on the basis that, "our whisky tells us when it's ready, not the other way round" according to Distillery Manager John MacDonald.  This policy started in 2007 and differs from the philosophy of most distilleries who release their whisky at various, well established age points such as 12, 18 and 25 years old.

Balblair is located in the picturesque village of Edderton, near to the town of Tain. It lies close to the shores of the Dornoch Firth, one of Scotland’s largest estuaries, with the the Highlands rising up behind and the Inverness-Thurso railway track running next to it. The distillery is one of Scotland's oldest (it was founded by John Ross in 1790), although the current buildings were constructed in 1893. Balblair is currently owned by Inver House Distillers, which is a subsidiary of the larger Thai Beverages group, and they have owned it since 1996. Balblair is currently running at full capacity, which gives an annual production of 1.8 million litres.

The Balblair 2001 Vintage is a landmark whisky for the distillery and Inver House. It is the first of their single malts to be released with a combination of being non-chill filtered, at a higher strength of 46% ABV and with no artificial colouring.  Going forwards, all Balblair releases are being planned as such. This whisky has been matured in ex-bourbon casks and bottled at 10 years of age.  Balblair 2001 was launched last week at the distillery and we were delighted to be invited to be part of the festivities. It will be available from specialist whisky retailers and on-line retailers very shortly and has a recommended price of £32.99.

Our tasting notes
The colour of the new Vintage is pale lemon yellow and the nose is delicate and fresh with initial aromas of green orchard fruits (especially pears and apples), honey and vanilla. Underneath are a series of subtle aromas that are interwoven with the more obvious ones. These include malty cereals, coconut, something floral (think of honeysuckle), orange zest and hints of almond and nutmeg. A lovely and highly distinctive note of marzipan develops with significant time (15+ minutes) in the glass.  On the palate, a delicious zesty tangy kicks things off (imagine lime and lemon) and it feels like this whisky has been dipped in honey. This is followed by a pleasant combination of sweet malty barley, juicy and crisp green fruit (think of the pear and apple again), vanilla and a pinch of drying baking spices, especially cinnamon and nutmeg.  The finish again offers immediate and sustained freshness in the form of citrus zest, dry wood spices and the green fruits, although these are more reminiscent of dried pear and apple by this stage and this gives a good level of sweetness.

What's the verdict?
This Balblair 2001 Vintage is a fine example of a whisky in the lighter and fresher style.  It shows excellent delicacy, subtlety and what can be achieved with the sympathetic use of quality casks during maturation.  If you like your whiskies richer or smoky, then you may come away disappointed but this is a great whisky to sip on during warm weather or as an aperitif.  While talking with John MacDonald at the launch, he commented that "this is my favourite of the younger Vintages" - it's hard to disagree with him.
posted by Whisky For Everyone at 7:04 PM