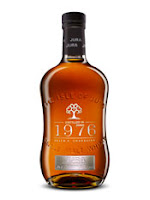 The 1976 ‘Feith A’ Chaorainn’ vintage is the latest vintage single malt whisky to be released by the island distillery of Jura. Previous such vintages from Jura have proved popular amongst whisky connoisseurs.  The name of 'Feith A' Chaorainn' translates as 'the land around the rowan' and refers to a rowan tree on Jura which is believed to bring good luck to islanders. They place twigs from this tree on their homes and farm buildings to protect themselves and their livestock from bad luck, storms and ill health.

The whisky has been constructed from just three first-fill ex-bourbon hogshead casks and was distilled in 1976.  The three casks have been 'married' together and bottled recently at an age of 35 years.  There are only 500 bottles in the release and to reflect this the recommended retail price is £500 each.  It is available now in specialist whisky retailers around the world.  The strength is 46% ABV.

The isle of Jura lies off the west coast of Scotland. The distillery was founded in 1810 by Archibald Campbell and was originally called Small Isles distillery - named after the numerous small islands located in Craighouse Bay, which it overlooks. It was closed for a long period between 1901 and 1960, when it was rebuilt and re-named as Jura by Charles Mackinlay & Co. Production restarted in 1963. The distillery has an annual production capacity of two million litres, which is large when considering its remoteness and the small population of the island (only 220 people at the last count).

Jura was given its name by invading Nordic warriors and it translates as 'deer island', because of the large number of the animals that inhabit the island - they outnumber people by a ratio of 20:1. The current owners of the distillery are Whyte & Mackay, who are owned by the Indian drinks company United Spirits. They use Jura’s whisky in their popular range of Whyte & Mackay blends. However, they are putting more in to promoting Jura as a single malt whisky and sales have improved greatly.

Our tasting notes
The colour is a rich coppery gold and the nose is very promising, if not a little understated.  There are heavy aromas of rich wood spice (especially cinnamon) and plenty of oak, complimented by a good dose of spiced/cloved orange zest.  Then come more subtle notes of vanilla, toffee and honey, backed up by a hints of peat smoke and coal tar soap.  On the palate, this is surprisingly fresh for something of this age and this manifests itself with a lovely tropical exotic fruit note (think of dried mango and pineapple in particular) and a hint of 'maritime' saltiness.  The freshness settles down to give a pleasant creamy feel that shows elements of sultana, vanilla, honey, oat biscuit, faint drying smokiness and a good hit of wood spice (imagine cinnamon, oak, sandalwood).  The classiness of this whisky is confirmed with lovely notes of milky coffee, chocolate and tangy orange zest, which add great depth and complexity.  With time in the glass (5+ minutes), a fantastic hazelnut praline note appears.  The finish is delicious but slightly short and a little dry, although the chocolate note reappears to rectify this.

What's the verdict?
This is a very classy whisky that has plenty of depth, freshness and complexity.  These elements combine to give a stunning final result.  It shows what can be achieved with the use of quality casks over a sustained period of maturation.  The younger Jura whiskies in their range are good for what they are, but this shows that the spirit can benefit wonderfully from prolonged ageing. The 1976 Feith A' Chaorainn is expensive, but it is limited in numbers and a fine single malt.  Delicious.

posted by Whisky For Everyone at 7:35 PM