This is a new limited edition to the range of Ballantine's, the popular blended Scotch whisky. The Ballantine's Christmas Reserve has been created by Ballantine's Master Blender Sandy Hyslop and has been designed to have a 'seasonal and festive profile'. It can be purchased up to and over the Christmas period in limited quantities and in limited markets including France, Spain, Taiwan and the UK.  The bottling appears with an alcohol strength of 40% ABV and should cost around £30.

Ballantine's is a famous whisky brand that boasts a multi award winning range of blended whiskies. The core range consists of the best selling Finest, plus 12, 17, 21 and 30 years old versions. The range is amongst the best selling whiskies in the world and is currently in second place for total volume sales, behind only Johnnie Walker, selling 70 million bottles a year. Ballantine's whisky was first produced in 1869 by a Edinburgh grocer named George Ballantine. He had expanded his grocery business in to the area of wines and spirits, before deciding to start blending his own whiskies. In 2005, the Ballantine's brand became part of the large multi-national drinks company Pernod Ricard, who remain the current owners.

Our tasting notes
The colour is a deep golden amber and the nose is sumptuous and packed with Christmas-like aromas - soft dried fruits (raisins, sultanas and dates), candied orange peel, crumbly brown sugar, caramel, toasted almonds and plenty of warming festive spices (cinnamon bark, nutmeg and star anise especially).  In addition to these, there are lovely aromas of fresh red apple, baked pear and a hint of milk chocolate. The scent is delicious and is like smelling Christmas cake in a glass.  This feeling carries on when you taste the whisky - it is soft, velvety, lovely and makes you think of Christmas with every sniff.  There is initial creamy vanilla and a blob of honey, before the notes from the nose come to the party.  Especially prominent are caramel, deep sweet spiced oranges, toasted caramelised almonds, soft dried fruits (think of mincemeat in mince pies) and baked apples and pears.  The soft spices build with time and are reminiscent of those used when mulling wine or cider - cinnamon stick, nutmeg, star anise, cloves and a pinch of powdered ginger.  The finish is long and begins with the dried and baked fruit notes, before becoming drier, woodier and spicier towards the end.

What's the verdict?
This whisky is delicious and very easy to drink.  It would offer a great introduction to whisky for someone who hadn't tried it before or thought they didn't like the stuff. It offers richness, compexity, depth of flavour and aroma and, most importantly, great value for money.  If this special blend were released at any other time of the year, then it would still be lovely.  However, the fact that it is being released at Christmas and the flavour profile matches perfectly with what is expected for this festive time makes it even better.  Our advice is to sit down with your friends or family over the coming holiday period and enjoy this wonderful dram.  We certainly will be! 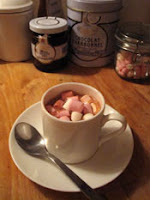 To support the the 2011 launch, Ballantine’s Brand Ambassador Fredrik Olsson has created a series of seasonal cocktails using the Christmas Reserve - the Golden Saffron Martini, the Spiced Hot Chocolate and Hot Christmas Punch - we had a go at making the Spiced Hot Chocolate (see our attempt, left) which was made by combining the Christmas Reserve with hot milk, drinking chocolate, marshmallows and a spoonful of chocolate sauce ... it was delicious.

Check out the video clip below, in which Sandy Hyslop explains the ideas behind the Christmas Reserve and how he selected the whiskies to be included in the blend.  Enjoy.

posted by Whisky For Everyone at 7:01 PM

Enjoy your bottle of Ballantines, Karen and Matt. I remember last year's release lived up to its Christmas credentials.
I appreciated your linking the video, too: the processes of a master blender are awesome to behold and Mr Hyslop has the eloquence to bring them to life.
Merry Christmas!