Welcome to Inbox - our weekly round up of whisky news and PR type material that has recently found its way in to our email inbox. It was created as we cannot write full articles or do justice to every piece that we receive. It features items from around the world of whisky and is published by us each Friday. Within Inbox we will write a few lines detailing each press release/piece of news/PR event that we have received and provide links, where possible, for you to find out further information if you want to. Here are this week's nuggets of news ...

The innovative Indian distillery of Amrut have announced the release of their latest limited edition single malt whisky.  The Amrut Portonova was first matured in new American oak and ex-Bourbon barrels and then transferred to Port casks from one of the most famous (although un-named) Port houses in Vila Nova de Gaia, Portugal for a further one year maturation period.  It was then back to ex-Bourbon barrels for finishing, Each stage of the maturation took place at the distillery warehouses in Bangalore. The Portonova has been bottled at a natural cask strength of 61.2% ABV and this limited edition consists of just 1250 bottles worldwide.  These have been split roughly in to thirds and will be sold in specialist retailers in the European, UK and USA markets for around €85, £75 or $115 respectively. 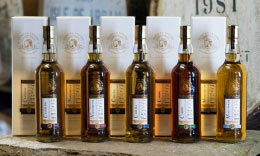 The award winning independent bottler Duncan Taylor have announced the launch of The Dimensions Collection - an range of single malt and single grain Scotch whiskies that showcase some of their best casks. The collection showcases the multi dimensional levels of character and flavour available from individual distilleries and casks. The Dimensions collection consists of two versions of bottling - single cask, cask strength releases and exclusively numbered small batches at 46% ABV. The Dimensions Collection is now available in specialist whisky retailers. 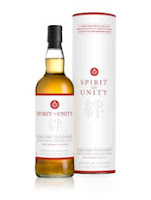 Earlier in the year, we reported on a unique whisky that was created by a group of seven independent Scottish distilleries. Each of the seven – Arran, Benriach, Bladnoch, Glendronach, Glengyle, Kilchoman and Springbank – donated a single cask of single malt, which were blended together to create a limited edition whisky named Spirit of Unity. The project was created to raise vital funds for relief efforts following the devastating natural disaster in Japan in March.  The 2,000 bottles have now been sold and have raised a staggering £95,000 for various charities.  Just a few remain, which are to be presented in limited box sets containing bottles signed by each of the seven Master Distillers. These will be auctioned in early 2012 to raise further funds.

The iconic single malt from the isle of Skye has revealed a full revamp of its packaging which will be released to all markets in early 2012. The new packaging will be rolled out over the entire range. The outer cartons feature powerful maritime photography and coastal scenes, taken by photographers Cailean Maclean (a Skye resident) and Angus Bremner, and a more prominent map of the island and distillery location. The bottle label features a bolder Talisker font and more prominence is placed on the Established 1830 message.

Talisker's Distillery Manager Mark Lochhead is enthusiastic about the new designs, saying “Talisker is made by the sea in every sense of the word. To have this captured in these new designs is exciting for everyone here. At the same time it both speaks to our own roots and helps consumers understand what kind of place Skye is".
posted by Whisky For Everyone at 6:57 AM