OK, before anyone contacts us - we realise that this Distillery Edition is not technically a 'new release' as it was first available in this form about two years ago.  However we have named it as such, as the limited edition expression of the popular 15 years old was formerly restricted to the shop at the Glenfiddich distillery and selected travel retail markets.  It has now been released to a wider audience for the first time and is set to wow whisky drinkers the world over.


The Distillery Edition is a combination of ex-bourbon casks and ex-Oloroso sherry casks, which have been aged for a minimum of 15 years.  They have then been married together for a period of time, before being bottled at an alcoholic strength of 51% ABV.  You will find it in selected specialist retailers and a bottle should cost around the £45 mark.

Glenfiddich is the most well known single malt brand and distillery in the world, selling the most Scottish single malt of anyone. The distillery is located in the Speyside town of Dufftown. The name is taken from the Glen Fiddich, the valley in which it lies and translates as 'valley of the deer' from Gaelic. The distillery is massive - it has a capacity of 12 million litres per year, which makes it Scotland's largest single malt distillery. Glenfiddich remains one of Scotland's few remaining family owned distilleries and was constructed by William Grant in 1886/87. It remains owned by William Grant & Sons to this day.

On Christmas Day this year, Glenfiddich celebrated the 125th anniversary of the first spirit running off their stills.  This significant achievement has been commemorated in a couple of high profile ways - the first is the special edition 125 Anniversary expression (pictured, above), which is a travel retail exclusive and shows Glenfiddich in its rare peaty form.  The second is an unusual Christmas tree which has been constructed at the distillery by its workers.  This is made from 665 of Glenfiddich's iconic green bottles (pictured, below). 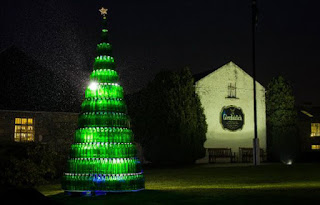 Our tasting notes
The colour is golden yellow with a tint of amber and the nose has an immediate aroma of fresh green apples combined with butterscotch.  This is delicious and soon reveals further aromas of dark dried fruits (think of raisins and sultanas), almonds and a decent amount woody spices - this is reminiscent of slightly damp wood shavings and cinnamon. It becomes more toffee-like and sugary with increased time in the glass.

On the palate, the whisky has an initial warm edge that grips your taste buds. The warmth is woody, spicy and a little drying with cinnamon and nutmeg particularly prominent.  After a short time a lovely sugary sweetness kicks in to balance the dryness and spiciness.   This sweetness as elements of vanilla, honey, dried fruit (especially sultanas) and barley sugar.  There are also hints of spiced orange peel, some slightly tart stewed apple and the tiniest whiff of soft and distant peat smoke.  The combination is very good and the initial warm edge noticeably softens with each sip.

The finish is of decent length and is like the palate, but in reverse - it is initially sweet with honey, vanilla and dried fruits carrying over from palate, before quickly becoming drier and woodier with plenty of cinnamon/nutmeg-like spices and toasted nuts present. A long lasting note of raisin finishes the experience.

The higher than normal ABV lends itself to the addition of water.  With a few drops added, more apple and vanilla come through on the nose and the wood spices soften.  It also softens on the palate and has less grip.  There is more of the apple note again but this comes across in a more fresh/green way rather than the previous stewed/cooked way.

What's the verdict?
The regular 15 years old in the Glenfiddich range is one of our favourite whiskies of all time, so it is difficult to compare this to that.  However, it gives that regular 15 years old a good run for its money.  It is full of expressive aromas and flavours, which gives the drinker plenty to think about, and offers all of the regular and well loved Glenfiddich characteristics while offering a little bit more.

It is easy to dismiss Glenfiddich's whiskies because of their huge popularity, but there is a reason that they are so popular - they make and release a consistently high standard of single malts.  This Distillery Edition is no exception.  It is well worth searching out because of this quality and also offers good value for money.