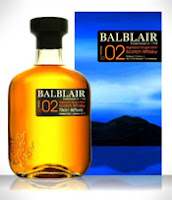 The Balblair 2002 is the latest Vintage to be released by the up-and-coming distillery. The policy of selecting whiskies from particular years, rather than well established age points such as 12, 15 or 21 years old, was started in 2007 and differs from the philosophy of most distilleries.  The whiskies are specially selected from Balblair's maturing stock by distillery manager John MacDonald and listening to him speak at a recent event he made one telling statement - "our whisky tells us when it's ready, not the other way round".  We liked that ...

Balblair is located in the picturesque north Highland village of Edderton, near to the town of Tain. The Highlands rise up behind the distillery and the Inverness-Thurso railway track runs next to it. The distillery is one of Scotland's oldest and was founded by John Ross in 1790.  The current buildings were constructed in 1893 and Balblair is owned by Inver House Distillers, which is part of the larger Thai Beverages group who have owned it since 1996.  Balblair has an annual production of 1.8 million litres and recently rose to fame by featuring prominently in Ken Loach's movie The Angel's Share.

The Balblair 2002 Vintage continues Inver House's policy of bottling the distillery's single malts with a combination of being non-chill filtered, at a higher strength of 46% ABV and with no artificial colouring. This policy was adopted about a year ago and has proved popular with consumers.  This whisky has been matured in ex-bourbon casks (about 100 were selected for this batch) and bottled at 10 years of age. It is now available from specialist whisky retailers and on-line retailers and should cost around the £38-40 mark.

Our tasting notes
The colour is a very pale lemon yellow and the nose is light and fresh with some lovely delicate aromas - think of crisp green apple, malty cereal grains, vanilla and some lemon zest especially.  With time, some further subtle and sweet aromas can be detected and these are reminiscent of over ripe bananas, marshmallow/bubblegum plus a whiff of fresh hay.

On the palate, the vibrancy of the nose is carried on and it feels immediately tangy and fresh.  There are initial notes of vanilla and honey, which combine well with some crisp green fruit (add some pear in with the apple from the nose) and toffee - the overall feeling is reminiscent of toffee apples that you buy at the fairground.  Underneath is a distinct note of bittersweet malty barley grain and there is also some lemon zest, which adds to the tangy feeling.  A final hint of marshmallow (or could it be icing sugar?), plus a pinch of cinnamon and nutmeg round things off.

The finish is uplifting and slightly on the short side.  It is again tangy with plenty of lemon zest and crisp, slightly tart green apple present.  This is balanced by some sugary honey-like sweetness and some drying wood spices (think of cinnamon and nutmeg) and a hint of the grassy/hay note from the nose.

What's the verdict?
This is a lovely whisky that demonstrates a highly sympathetic use of good quality casks - it must be difficult to retain such subtly and delicacy in a whisky that has been maturing for 10 years, as the casks could easily overpower this light spirit.  Balblair are one of the best exponents of this, and it is why they produce some of the best whiskies around in this lighter style.

The nose and palate show these qualities off superbly and have a surprising depth and complexity for such a delicate whisky. The finish is the only slight disappointment and is a bit short, but it is not a deal breaker.  Balblair 2002 is a very good whisky but may be too light for some, especially those who like their rich sherry casked whiskies or their smoky, peaty ones.

Nice review. Although I love my peated malts, and sherry casked malts as well, this is a wonderfully subtle and complex dram. Really enjoying it!