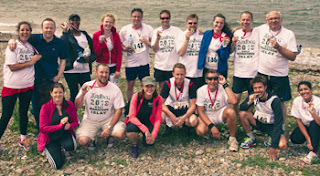 The Ardbeg Half Marathon took place on the whisky brand's home island of Islay last weekend and one group of drinks writers, retailers and Ardbeg brand ambassadors took part.  Over 20 people formed the group (pictured, above after finishing), which was a decent proportion of the overall 165 entrants, and included our good friends Marcin Miller of Quercus Communications and Joel Harrison of CaskStrength.

They were all running to raise money for the National Brain Appeal in support of Alan Lodge, a fellow drinks writer with The Spirits Business who passed away last year after a brain haemorrhage at the age of just 29.

Sian Deegan, the Senior Brand Manager for Ardbeg, said "On behalf of everyone at Ardbeg I'd like to congratulate all the runners who raised money for the National Brain Appeal this weekend. We are delighted to have extended some proper Islay hospitality to all the participants and proud to have raised a glass of Ardbeg to the memory of our late friend and colleague Alan Lodge."

Ballantine's - Gets musical
The popular blended Scotch whisky brand continues its recent interactive consumer experiences with a new competition - the Ballantine's Soundtrack of You.  The brand had teamed up with British DJ legend Pete Tong and invites fans from around the world to portray their life stories through music by submitting and sharing a playlist of five influential songs.

The competition will run until September 13 2013 and can be entered via a special Soundtrack of You Facebook app - http://apps.facebook.com/soundtrackofyou. This will allow you to upload the five tracks that represent your personality and life stories.  Each entry will be subject to a public vote, with the selection that receives the most votes being the winner.

The prize is a two night trip to Edinburgh in October, which includes tickets to the Ballantine's Soundtrack of You event at which Pete Tong will be DJing.  Check out the short video, where Pete Tong reveals his 'soundtrack' ...

Laphroaig - Celebrates Coronation
The best selling Islay single malt brand of Laphroaig has taken part in the recent Coronation Festival, which was held in the gardens of Buckingham Palace in London.  The festival was to celebrate the 60th anniversary of the Queen's Coronation and featured many companies which hold Royal Warrants, of which Laphroaig is one.  It was granted its Royal Warrant by Prince Charles in 1994.

The festival received 60,000 visitors and over 14,000 visited the Laphroaig stand (pictured, left) and sampled the 10 years old and Quarter Cask expressions.  In addition John Campbell, the Distillery Manager of Laphroaig, treated a crowd of 150 guests to a tutored tasting of the two expressions plus the 18 years old.

Scotch Malt Whisky Society - Move north
The SMWS have announced a partnership with the Musa Bar in Aberdeen.  The partnership will see the bar stock a selection of SMWS malts and host events.  To celebrate the link Musa Bar will be hosting a whisky dinner on Wednesday 14 August, which will include food pairings with SMWS whiskies and a competition to win a complimentary annual membership.  For further details and to book tickets, go to www.musaaberdeen.com.

posted by Whisky For Everyone at 7:46 PM