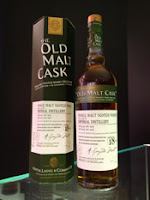 This whisky forms part of the first set of bottlings from the newly formed independent bottling company of Hunter Laing & Co. The company was formed in May after the owners of Douglas Laing, brothers Fred and Stewart Laing, decided to go their separate ways earlier this year.  Stewart has formed Hunter Laing & Co along with his two sons (Andrew and Scott) while Fred has taken full control of Douglas Laing, which is one of the oldest and biggest independent bottling companies in the Scotch whisky industry.

The Imperial distillery was founded in 1897 by Thomas Mackenzie and was named as such to celebrate Queen Victoria's Diamond Jubilee, which was held in the same year.  It was located in the heart of the Speyside region, sitting on the River Spey at the village of Carron.  Imperial has had a chequered history and has been out of production for 60% of its history.

When in production, its whisky was well regarded amongst blenders and was used in famous blends such as Teacher's and Ballantine's.  It closed for the final time in 1998 and much of the buildings and equipment have been dismantled.  The current owners are Pernod Ricard, who have recently announced plans to build a brand new distillery at the Imperial site, although it is believed it is going to be renamed.

The Old Malt Cask range was formerly released by Douglas Laing, but has been taken on by Hunter Laing.  The whiskies are all single cask bottlings and are very limited in numbers because of this.  They are all generally bottled, as this one is, at 50% ABV with one or two exceptions.  Casks of imperial are rare and this one is bottled at 18 years of age, having been distilled in May 1995 and bottled in May this year.  It has been matured in a refill hogshead cask, which has yielded just 346 bottles.

A bottle will cost £129.99 and is exclusive in the UK to The Whisky Shop chain, either from one of their 21 stores or via www.whiskyshop.com.

Our tasting notes
The colour is golden yellow with a tint of amber.  The nose has a warm and welcoming aromas with two particular notes combining superbly - these are butterscotch and candied orange. Underneath these is a further aroma of malted barley, which adds a bittersweet edge to it, along with notes of vanilla, honey and lemon zest.  There are also hints of dried grass, brown sugar and earthy ginger root.

On the palate this feels luscious and velvety, even at 50% ABV.  There is a lovely initial combination of sweet malted barley sugars and butterscotch, and these are complimented by notes of tangy candied orange peel and plenty of cinnamon bark.  With time in the mouth, the barley sugars become more accentuated and are joined by notes of crumbly brown sugar, honey and caramelised almonds.  There is also some fruitiness present and this is reminiscent of dried orchard fruits like green apple and pear.  Finally comes some earthy ginger and an increase in the candied orange note, which leads in to the finish.

The finish is long, warming and predominantly sweet.  The tangy orange note soon fades to leave some good notes of honey, malty barley and butterscotch.  The wood spices (think of cinnamon with a pinch of star anise) and the earthy ginger note then come to the fore and add some pleasant bitterness and dryness, before slowly fading.

What's the verdict?
We have not really tried many expressions from Imperial, and then it was right at the very beginning of our whisky journey.  It is always good to sample something from an unfamiliar distillery and form opinions of it, especially one that has such a scarcity of remaining stocks.  This one is well worth searching out - it's a gem which will soon no longer be available.

Single cask releases from independent bottling companies can be a little bit hit or miss from our experience.  This Imperial from Hunter Laing is definitely a hit and is an excellent whisky within their initial set of releases.  We look forward to sampling some of their subsequent whiskies and hope that all are of this superb quality.

Douglas Laing is not closed! Only a split of the 2 brothers

Gone are the days when you could come across an inexpensive Imperial, it would seem. I will have to try and search out a sample of this, however, as the distillery is one of my favourites with abundant delicate citrus - as you mention - but also a lovely range of weighty, malty textures. It is a far more complex prospect than it at first appears.

Not sure where you get your facts from but Douglas Laing is / has not been closed. Some careful review, would simply answer this.

Established in 1949 - Douglas Laing has been going strong ever since and remains open for business today. Fred Laing has taken 100% control of the original Douglas Laing business and his brother now departed from Douglas Laing, Mr Stuart Laing, has started a new company Hunter Laing - a privilege of his departure was to take with him Old Malt Cask - a Douglas Laing creation.

I enjoy your blog and bizarrely I'm off to enjoy an Old Malt Cask, Bruichladdich 14 years old.

Thanks very much for your comments. Apologies for the error in the original blog post, which you both raised. I was working from an incorrect information source. I have now spoken directly to Douglas Laing, who have explained the situation. I have now changed the blog post to reflect this.