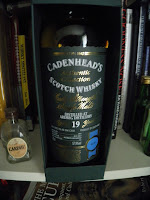 It’s very unusual for a new Ardbeg to come onto the market without the whole whisky world knowing about it, but here’s one recent release that’s slipped under the radar. No big fanfare for this new Ardbeg, no ruminant based activities were involved in the launching of this bottling from independent bottlers and retailers Cadenhead's. Having just stumbled upon this bottling online I decided to hop over to the Cadenhead's London store and buy a bottle.

Cadenhead's are Scotland’s oldest independent bottler having been established in Aberdeen in 1842 by George Duncan. Now run by J&A Mitchell company, owners of Springbank, Cadenheads have several shops dotted all around Scotland and Europe selling single cask, cask strength bottlings alongside Rums, Cognacs and Gins.

Ardbeg is located on the rugged south coast of the island of Islay in the Inner Hebrides. It shares this coastline with its equally famous neighbours Lagavulin and Laphroaig being as they are only a few minutes drive from each other. Like these two distilleries, Ardbeg is no slouch in the peat smoke department (in fact it has a higher peating level than both its neighbours). The current owners Moet Hennessy (who also own Glenmorangie) have done a lot to promote the Ardbeg brand over the last few years and this once cult distillery is now one of the most popular and sought after whiskies amongst whisky fans.

This whisky is 19 years of age, distilled in 1993 and bottled in July 2013. It’s matured in a bourbon hogshead and is 57.9% abv. There are only 312 bottles available. The price is £79.50. This particular bottling is quite interesting in that it was distilled during a period when Ardbeg’s future looked very bleak indeed. For the period between 1982 and 1997 Ardbeg had produced very little whisky. It suffered the unfortunate circumstance of sharing the same owner as Laphroaig and these owners, Allied Distillers, did not require two Islay malts in their portfolio.

This whisky was distilled by the staff from Laphroaig as they would pop over to Ardbeg for a couple of months every year between 1989 and 1997 to run the distillery in order to maintain the equipment. It was Moet Hennessy’s predecessors Glenmorangie plc who saved the distillery from certain destruction when they bought it following Allieds decision to close Ardbeg permanently.

Our tasting notes.
The nose has an initial hit of smoked meat like bacon and frazzles. Settles down with medicinal, coastal and citrus aromas all competing with each other but all managing to complement each other really well.. We have a first aid kit of aromas in Iodine, bandages and TCP. There’s oily kippers, oysters, seaweed and tar and a really pronounced lemon citrus aroma as well like lemon zest, and lemon sherbet. All the while there’s the peat and the smoked meat enveloping everything.

With water the oak comes to the fore with more wood spice, vanilla and after a while marshmallows. There’s still some of the smoked meat and peat in the background and more of a grassier, herbaceous character with a little mint, lemon vebena and angelica. Undiluted, the palate is pretty powerful stuff. Initially there’s a big dollop of American oak driven whisky with vanilla, ginger, lemon meringue pie companied by a little saltiness. Very mouth drying. The peat and a little bit of smoke gradually get more and more dominant until they roar across the palate and elbow everything else into the background. There’s lots of earthy peat and tar and a lovely unctuous oily mouth feel. The finish is very bitter with lots of oak, huge amounts of peat and cough medicine.

Excellent with water, the palate gets a lot mellower and rounder and similar to the nose. There’s more vanilla but also dried reeds and still a bit of saltiness. The peat smoke is also still there taking more of a back seat. The finish leaves a lovely long lingering peat smoke taste with a squeeze of lemon juice and a slightly bitter, oaky flavour as well. Both the cask and the spirit are very much in evidence here which is great. Both are duking it out for dominance, I wouldn’t say it’s the most harmonious of partnerships but that’s by no means a bad thing.

What’s the verdict?
This is an excellent whisky. So much complexity as you’d expect from a 19 year old Ardbeg. The bourbon hogshead really compliments the spirit character very well. It’s been a long while since I last tried a new Ardbeg purely matured in an ex-bourbon cask and although Moet’s recent wine cask releases have been excellent it’s great to be reminded how good Ardbeg is in Amercian oak. What’s even better is the price, a cask strength Ardbeg at £80 is very good value this day and age so hats off to Cadenhead's for putting this out at a fair price. Problem is there’s only 312 bottles of it so be quick!

Unfortunately the price that various shops are asking for do tend to be much higher, rather 170-200 Euro, which seems for me exaggerated.
But in modern times a wallstreet mentality seems to be seen also in this business (what a pity!)
cheers, Mike