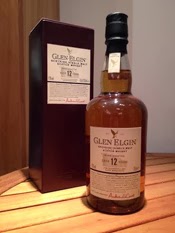 After nearly six years of writing this blog there are still so many whiskies for us to sample, and something from Glen Elgin is one.  The distillery was founded in 1898 by bankers James Carle and William Simpson, and is located to the south of Elgin in the Speyside region of Scotland.  It was designed by the legendary architect Charles Doig, who is credited with inventing the pagoda roof found at many distilleries.  He worked on many Scottish distilleries and Glen Elgin was his last project.

Glen Elgin is currently owned by Diageo and has an annual production capacity of 2.7 million litres.  The whisky produced there is one of the main constituent parts in the famous White Horse blend, which sells 12 million bottles a year.  The only official single malt bottling is this 12 years old expression, with occasional older versions released.  The only other way to buy Glen Elgin is through the independent bottling companies, but even then it is scarce.  This 12 years old should cost £35-40 from specialist whisky retailers.

Our tasting notes
The colour is golden yellow and the nose has a lovely mix of aromas.  The prominent ones to begin with are of fresh green apples and caramel.  Underneath are further aromas of gingerbread, malted cereals, cinnamon, dried pears and hints of orange oil, honey and cocoa powder.

On the palate, this whisky feels soft and gentle but with a nice background fresh ginger-like warmth.  This gingery note carries on throughout and evolves to become more like gingerbread, as on the nose.  The prominent notes are again green apple, although this is reminiscent of stewed apple now, and distinct sweet toffee/caramel.  These are complimented by notes of bittersweet malted barley, honey and vanilla.  With time some tangy dried orange zest starts to come through as do increasing wood spices especially cinnamon bark, a pinch of nutmeg and late hints of cocoa and milky coffee.

The finish is initially quite tangy with the orange note to the fore, but as this subsides the whisky again becomes softer.  There is a delicious mix of caramel, stewed apples and ginger.  The woody spices, especially cinnamon, build up and are the last notes to fade.

What's the verdict?
The Glen Elgin 12 years old is a lovely easy drinking whisky that would be ideal for a beginner.  It has a pleasant richness, sweetness, fruitiness and spiciness without going too far in any one direction.  This makes it well balanced but it does lack a little depth and complexity, which may put more advanced whisky drinkers off.  It is always good to try something that you have never sampled before, and Glen Elgin gets a tick from us both in terms of character and as another distillery on our ever growing list.

One of my six favourite whiskies, which I love for its poise and balance. Can't always be doing with "depth and complexity" ;-)
Pat

Yes! Who needs depth and complexity. I feel fortunate to have purchased 2 bottles without sampling. Love it so much

Yes! Who needs depth and complexity. I feel fortunate to have purchased 2 bottles without sampling. Love it so much