Within Inbox we aim to write a few lines detailing each press release/piece of news/PR event that we have received and provide links, where possible, for you to find out further information.  The whisky world and PR departments are slowly waking up as we enter February.  Here are a couple of bits for this week ...


Balvenie - The Intelligent Hand
The Balvenie had further extended their credentials in the area of hand craftmanship with the release of a new short film, entitled The Intelligent Hand. The Speyside distillery has long been regarded as one of the most traditional and handcrafted single malts in Scotland - it still grows some of the barley used in production, has traditional floor maltings and its own team of coppersmiths and coopers.

The film has been produced by documentary maker James Rogan and directed by Oliver Cheetham, and shows five craftsmen at the top of their game from across the globe - Biren Vaidya (a jeweller from Mumbai in India), Isabella Wen (a fashion designer from Taipei City in Taiwan), Rick Kelly (a luthier from New York in America), Maxim Sharov (a handbag maker from Moscow in Russia) and Paul Bergamo (a bell-founder from Normandy in France).

The global premiere of The Intelligent Hand was held at BAFTA in central London on February 5th to a selected crowd from the worlds of whisky, craft, film and also lucky members of The Balvenie Warehouse 24.  A date of release is yet to be announced as the film is being entered for various film awards.  Here is the trailer ... 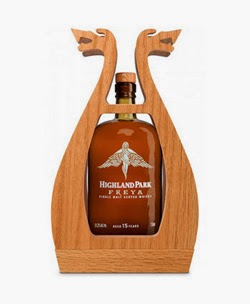 Highland Park - Freya on her way
The multi award-winning distillery from the Orkney islands has announced the third single malt in its popular limited edition Valhalla Collection series. All of the series are named after Norse Gods and Goddesses and each whisky tries to draw on the characteristics of each figure. The third release is named after Freya, the Goddess of Love, and follows on from 2012's Thor and 2013's Loki.  Our review and tasting notes for Freya will appear over this weekend.

The Freya has been bottled in the same packaging as the previous Valhalla Collection releases - this is a hand blown brown glass bottle housed in a wooden frame designed to represent the bow of a Viking long boat. It is released at the natural cask strength of 51.2% ABV.  The actual number of bottles of this limited edition has not been revealed in the press release.  The recommended retail price is £140 and will be available in specialist whisky retailers, at the Highland Park distillery shop and via www.highlandpark.co.uk.  A number of online retailers already have Freya available to pre-order.

Jameson - Celebrate St. Pat's Day
The world's biggest selling Irish whiskey brand have announced a special limited edition label for the regular Jameson bottling. It is the fourth such release for St. Patrick's Day by the brand.  This year's label is designed by award-winning Irish illustrator Dermot Flynn, whose aim is to bring 'Dublin to life'.  This has been achieved by featuring local sights, famous people and sayings.  The limited edition will be sold in 40 markets worldwide, including the travel retail sector.

Daniel Lundberg, the Global Brand Director for Jameson, says: “Whiskey fans around the world tell us they love Jameson for its intrinsic Irish character. Jameson embodies the down-to-earth character of Dubliners so with this new limited edition, we wanted to bring that to life and celebrate the great city which inspired John Jameson to make his now iconic whiskey for the first time over 230 years ago.”