Within Inbox we aim to write a few lines detailing each press release/piece of news/PR event that we have received and provide links, where possible, for you to find out further information.  There have been a number of new releases announced, so here is the news that has caught our attention from this week ...

AnCnoc -18 arrives
The Highland single malt brand has announced another new release in what has been a busy year.  The 18 years old expression is the latest from the Knockdhu distillery, where AnCnoc is made, and has been matured in a combination of ex-bourbon American oak and ex-sherry European oak casks.  There will be 6,000 bottles available in the initial release.  These are bottled at 46% ABV and are non chill filtered and of natural colour.  The recommended price is £70.

AnCnoc's Assistant Brand Manager Stephanie Bridge explains: “2014 has been AnCnoc’s most ambitious year to date. We unveiled our new Peaty Collection in April, two new expressions for travel retail and our hugely popular 2000 Vintage. We are confident that our new AnCnoc 18 year old will be popular amongst single malt aficionados with its unique taste profile and striking packaging.”

Arran - Fancy a Bere?
The independent Isle of Arran Distillers have announced a cask strength limited edition version of the Orkney Bere single malt.  The whisky has been matured for 10 years in ex-bourbon barrels and comes in at a strength of 56.2% ABV.  There are just 4,890 bottles and they will be available in selected markets - Belgium, Denmark, France, Germany, Holland, Japan, Switzerland and the UK - from November 10th.  The recommended price is £60.

The whisky has been developed with a team from the Agronomy Institute at Orkney College UHI, part of the University of the Highlands and Islands, to revive the bere strain of barley. This was believed to have been introduced to Scotland by the Vikings over 1,000 years ago and was regularly used by farmers until the 19th century.

Euan Mitchell, Managing Director of Isle of Arran Distillers, said: “We are one of only a handful of distilleries that use bere barley as it is notoriously difficult to grow. However, for those who persevere, it can produce an outstanding malt. We’re constantly looking for new ways to excite whisky aficionados, and we have the freedom to try new things as we have done with the Orkney Bere edition". 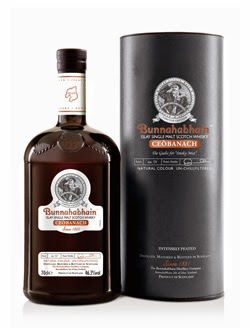 Bunnahabhain - Ceòbanach drifts in
The Islay distillery of Bunnahabhain have revealed a new limited edition release that is said to 'draw inspiration from life on Islay in the 1800s'. The expression, named Ceòbanach (pronounced kyaw-bin-och), which translates as ‘smoky mist’ from Scots Gaelic, has been matured and monitored for ten years by Master Distiller Ian MacMillan.

It was produced to hark back to the old style of Bunnahabhain that used peat to dry the barley.  This peat smoke is said to have combined with the salty sea air to create what the locals described as 'ceòbanach'.  The whisky is bottled at 46.3% ABV and is non chill-filtered.  No details of price or the number of bottles were included in the press release.

Ian MacMillan commented: “With the new millennium I decided to turn back the clock and recreate the original Bunnahabhain. I have spent a decade regularly monitoring, nosing and tasting these whiskies as they matured. I envisaged this product would be perfect around 10 years old. Although we could never fully replicate the original style of spirit produced at Bunnahabhain, Ceòbanach is as close as we could possibly hope for.”

Douglas Laing - X marks the spot
The independent bottling company of Douglas Laing & Co have announced their premium single cask range named Xtra Old Particular or XOP for short.  The bottlings that will feature in the range will showcase some of the company's rarest Scotch single malt and single grain whiskies.  All will be personally selected by Managing Director Fred Laing and are bottled at their natural cask strength and are of natural colour and non chill filtered.

The initial batch of releases feature a Caol Ila 30 years old and Macallan 26 years old malts and an Invergordon 40 years old grain.  All are presented in a wooden casket and bottles feature a screen printed design, labels featuring regional colour coding and an individually numbered certificate.  They will be available from mid-November from selected whisky specialists.