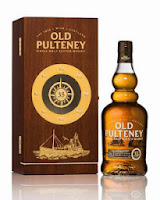 This whisky is the latest premium release from the popular Highland single malt brand of Old Pulteney.  It has been matured in a combination of ex-bourbon and ex-sherry casks, which were hand selected by Distillery Manager Malcolm Waring, for 35 years.  This makes it one of the oldest bottlings ever to be released from the distillery, second only to last year's 40 year old expression.  This 'new' release was actually launched back in June but we are only now getting around to reviewing it ...

Old Pulteney was founded in 1826 by James Henderson. It was named after Sir William Johnstone Pulteney and remains as one of the few distilleries to be named after a person. It is the most northerly mainland distillery in Scotland and is located in the Highland fishing town of Wick, which lies just 15 miles south of John O'Groats. Wick was one of the biggest herring fishing ports during the early Victorian era and Sir Pulteney was one of the major influential figures of the time.

Old Pulteney is currently owned by Inver House Distillers, which is part of the larger Thai group InBev, and has a production capacity of three million litres a year. It nestles amongst regular town buildings just a few hundred metres from the harbour.  The brand has grown massively in the last three years and this has seen Old Pulteney climb into the top 20 for world sales of single malts.

This 35 years old expression has been bottled at 42.5% ABV and is non chill-filtered. There are just 2,700 bottles available and these can be found in specialist whisky retailers worldwide. The recommended retail price is £500.

Our tasting notes
The colour is golden yellow and the nose is light, elegant and very complex.  The prominent aromas are of golden syrup, fresh ginger and robust malted cereals.  With time further aromas of vanilla, brown sugar and linen develop along with hints of lemongrass, milk chocolate and candied peel (think of orange especially).

On the palate there is an instant warming note of wood spices.  This is reminiscent of cinnamon and is quickly joined by the ginger and golden syrup.  It feels luxurious and thick in the mouth, with a hint of earthiness coming from the ginger.  As the warming and spicy notes begin to mellow, some dried fruit (think of raisins and candied orange peel in particular) develop and become quite tropical as the whisky moves towards the finish.  This is highlighted by a distinct mango/papaya note.  The foundation for this complex mix of flavours is a robust malted barley note.  A final hint of cocoa

The finish is long with the sweetness and dried fruit more prominent.  The golden syrup and tropical notes linger longest and create a lovely juicy feel.  This is complimented by hints of bittersweet malt and cocoa right at the end.

What's the verdict?
Old Pulteney have put together and released a stunning whisky here.  This 35 years old expression combines a delicious flavour profile with elements combining together superbly and a pleasing depth, complexity and warmth.

This is a whisky that leaves a lasting impression and one that is very classy.  It is how older whiskies should be in our opinion.  We urge anyone with £500 to put towards a bottle to seriously think about this whisky.  Excellent.

To read about our visit to the Pulteney distillery - click here.

Some of those deliciously briny oily drams such as Highland Park seem to lead from one level of amazingness to another in the older expressions - I imagine Old Pultney is no different and am very jealous of you guys getting to try this one! It sounds delicious and is very well reviewed!
Keep on waffling,
Nick