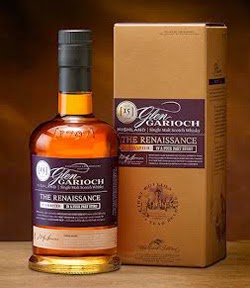 This is the first bottling in a new series of four single malts from the cult east Highland distillery of Glen Garioch. The Renaissance Collection will showcase whisky that has been produced since the distillery was re-opened by owners Morrison Bowmore in 1997. It had been closed for two years prior to that. This first release is at 15 years old and called First Chapter.  It will be followed annually by 16, 17 and 18 year old expressions.  This new release appeared back in August.

Glen Garioch (pronounced glen-geery) is located in the village of Oldmeldrum, which is found between Inverurie and Aberdeen in the east Highlands. It is one of the oldest distilleries currently in operation in Scotland, having been founded in 1797 by Thomas Simpson. The distillery is currently owned by Morrison Bowmore, who are part of the larger company of Beam Suntory.  The distillery is relatively small with an annual capacity of around one million litres and is one that continues to follow the old traditional whisky making process closely.

The aim of The Renaissance Collection is to chart the progress of Glen Garioch's house style in the casks as the years increase. This first 15 years old release is bottled at the natural cask strength of 51.9% ABV and is non chill-filtered. It, and the other later bottlings, are limited in number. The 15 years old is available now in selected whisky retailers around the globe. The recommended retail price is £80.

Our tasting notes
The colour is golden amber and the nose is immediately very grainy.  The vegetal aromas continue as the malt is joined by some dried grass.  This gives the whisky a savoury feel and sweetness is introduced with aromas of demerara sugar, honey, something floral (think of white flowers like jasmine or honeysuckle) and a hint of orange.

On the palate this has a firm and savoury feel.  It grips the taste buds and the immediate grain is again evident and at the forefront.  This has a malty and bittersweet edge.  The dried grass from the nose is also prominent.  This note and a distinct woody spiciness (imagine cinnamon especially) gives an increasingly drying effect.  As with the nose, some much needed sweetness finally comes through in the form of golden syrup, honey and crumbly brown sugar.  Hint of jasmine, bitter orange and ginger round things off.

The finish is quite short but refreshing.  The dry, savoury characteristics lead the way and last longest with the sweeter honey and sugar notes disappearing quickly.  Ideally we would have liked these to hang around for more time.

What's the verdict?
This is a clean, fresh and uncomplicated whisky.  The experiences on the nose are duplicated on the palate but little else is added.  Some less experienced consumers may struggle with the intense and robust maltiness and the bittersweet edge that this gives.  It also creates a slight imbalance for us and the finish is a little short and dry.  It will be interesting to see how this series develops over the next three releases.