Within Inbox we aim to write a few lines detailing each press release/piece of news/PR event that we have received and provide links, where possible, for you to find out further information.  This is traditionally a quiet time of the year as the whisky industry wakes up slowly but here are a couple of big releases that caught our attention from this week ... 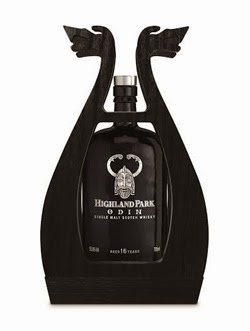 Highland Park - Valhalla completed
The single malt brand located on the Orkney islands has announced the long anticipated launch of the fourth and final bottling in The Valhalla Collection - Highland Park Odin.  Each of the series is named after legendary figures from Nordic history and Odin, the King of Asgard, follows the previous award-winning releases of Thor, Loki and Freya.

Odin is bottled at 55.8% ABV and 16 years of age.  There are just 17,000 bottles, which will retail for £180 each.  Demand will be very high and many specialist retailers are reportedly sold out.  As with the rest of the series, Odin is presented in an extraordinary wooden casing that is designed to represent the head of a Viking long ship.

Gerry Tosh, Global Marketing Manager for Highland Park, says: “Odin, like its namesake, is an intense, powerful and complex whisky that lives up to the legend, a bold single malt higher in strength than Thor, Loki and Freya. In Odin, we have been able to add the final flourish to The Valhalla Collection, a stunning series of four remarkable whiskies that offer affordability and exclusive collectability.”


The popular Speyside distillery of Macallan has revealed a new super premium single malt range in its portfolio - The 1824 Masters Series.  This is designed to be a luxurious and natural progression to the current 1824 Series core which features the Gold, Amber, Sienna and Ruby expressions.  Two new whiskies, named Reflexion and No.6, join the existing M to make the range and have been hand crafted by Bob Dalgarno,  Macallan's Master Whisky Maker.  He selected all of the casks used in the creation of the series.

The Reflexion is bottled at 43% ABV and will retail for £900 - it is made predominantly from first-fill ex-sherry casks although both American and Spanish oak have been used.  The No.6 is also bottled at 43% ABV and will retail for £2,800.  This has been created by Dalgarno using only first fill Spanish oak ex-sherry casks from a single cooperage in Jerez.  Both expressions are presented in exquisite glass decanters, with the one for No.6 being designed and made by Lalique.  Both will be available through luxury and specialist whisky retailers.

Ken Grier, Director of Malts for Edrington (Macallan's owners), says: “The new 1824 Masters Series represents an extremely exciting development for The Macallan. The stunning designs and overall imprint of this collection are not only worthy of our most complex and precious single malt whiskies, they celebrate the very foundations that make The Macallan so special – our glorious range of natural colour and the outstanding quality of our casks .”

Oban - Little Bay on the horizon
The west coast single malt brand of Oban has announced a new expression for its core range - Oban Little Bay.  The whisky is so named as Oban translates as 'little bay' from Gaelic and has been created by two of Diageo's Master Blenders, Dr Matthew Crow and Dr Craig Wilson.  Little Bay is currently only available in the USA and wider global distribution is planned for later in 2015.  It is bottled at 43% ABV and costs $75.

The Master Blenders have used a range of different ages of whisky, which have been matured in three types of casks - European oak ex-sherry casks, re-fill casks with new oak cask ends and re-fill American oak hogsheads.  These have then been combined and married in small oak casks for a short period of time to allow integration of flavours.

posted by Whisky For Everyone at 9:04 PM