Within Inbox we aim to write a few lines detailing each press release/piece of news/PR event that we have received and provide links, where possible, for you to find out further information.  The whisky industry has finally started to wake up in earnest this week with some big new releases announced. Here is what has caught our attention this week ... 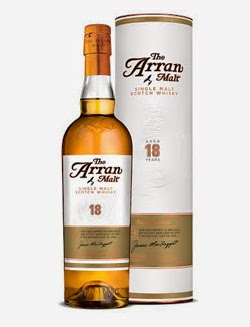 Arran - Comes of age
The independent island distillery of Arran have announced their first ever 18 years old expression.  This is the oldest single malt from Arran, which started production in 1995, and is the final part of a trilogy that has seen 16 and 17 year old versions released during the last two years.  The whisky has been matured in ex-sherry casks and is bottled at 46% ABV.  It is non chill-filtered and of natural colour.  There are just 9,000 bottles and will be available from mid-March via specialist retailers or www.arranwhisky.com.

James MacTaggart, the Master Distiller at Arran, says: “This is a very special bottling for us, not only being the most mature Arran malt yet but as the first release in our our twentieth year. It represents the very best of our whisky, with the depth of aroma and flavour for which Arran malts have become known around the world. So with so few bottles, we don’t expect the 18 year old to be around for long.”

Midleton - Irish oak arrives
Irish Distillers Pernod Ricard, owner of the premium Midleton pot still whiskey brand, have announced its first ever expression to be part-matured in virgin Irish oak hogshead casks - the Midleton Dair Ghaelach.  The name translates as 'Irish oak' from Gaelic and is constructed from whiskeys of between 15 and 22 years of age, which have then been finished in the Irish oak casks for 10 months.

The project has been led by Billy Leighton, the Master Blender at Midleton, and Kevin O'Gorman, the Master of Maturation.  They have located various locations in Ireland and harvested Irish oak.  Casks have then been constructed.  The first batch is from casks made from 10 trees felled in April 2012 from Grinsell's Wood on the Ballaghtobin Estate in Co. Kilkenny.  Each cask has a different strength and these range between 58.1-58.5% ABV and the individual tree is marked on the label.  The price will be €320 and they will initially be available in France, Germany, Ireland, South Africa and the UK.

Billy Leighton, comments: “The process of maturing in native oak has enabled us to showcase our single pot still Irish whiskey style in a new and innovative way; the casks impart much more generous toasted wood, vanilla and caramel flavours than what we expect from American bourbon and Spanish oak, which we hope whiskey lovers will appreciate and enjoy.”

Tomatin - Two new releases
The Highland distillery of Tomatin have announced two new single malt releases.  The first is the Cask Strength, the first such release to be put into the core range, and is bottled at 57.5% ABV.  It has been matured in a combination of ex-bourbon and ex-Oloroso sherry casks and is scheduled as a 15,000 bottle release each year.  The Cask Strength is of natural colour and is non chill-filtered, with a recommended retail price of £45.  It will be available worldwide, except in the USA.

The other release is an extension of Tomatin's lightly peated Cù Bòcan range. The Virgin Oak Edition has been solely matured in first-fill fresh oak casks and is limited to just 6,000 bottles.  These will be available worldwide (except the USA) and is again of natural colour and non chill-filtered.  It is the second release in a trilogy, which is showcasing three different cask types.  The Virgin Oak Edition is bottled at 46% ABV and will retail for £50.


posted by Whisky For Everyone at 3:54 PM