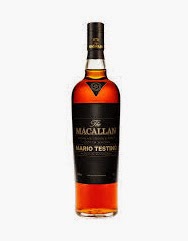 This whisky is the latest in the cult Masters of Photography series of single malts by The Macallan. This is the fifth such release in the programme, which was started back in 2010/11.  Each bottling in the series is accompanied by a series of images from a highly regarded photographer and an exhibition of the work.  This year's edition is been completed in conjunction with Mario Testino and follows on from the previous four photographers Rankin, Albert Watson, Annie Leibowitz and Elliott Erwitt.

The Macallan was founded in 1824 by Alexander Reid and is located on the Elchies estate in the Speyside region of Scotland. The distillery was originally called Elchies and sits overlooking the River Spey and the village of Craigellachie. The Macallan is owned by the Edrington Group and is one of the largest single malt distilleries in Scotland, with an annual production capacity of eight million litres.  This is to expand as plans for a futuristic new distillery have been approved for the site.  The range of single malts is extensive and is third in total world sales for single malt behind only Glenfiddich and Glenlivet.


Mario Testino is one of the world's leading portrait and fashion photographers and is best known for his work with Vanity Fair and Vogue magazines as well as his work with all of the leading fashion houses including Burberry, Dolce & Gabbana and Versace.  He established himself on the London fashion scene in the mid-1980s after coming over to the UK to study photography from his native Peru in 1976.  He has since gained legendary status and has photographed many leading female figures including Princess Diana, Kate Moss and Madonna.  Testino was awarded an OBE in 2014. 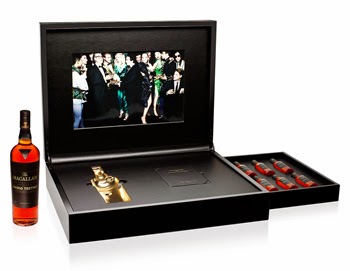 The Mario Testino Edition sees six different casks selected and married together by Bob Dalgarno, the Master Distiller at The Macallan.  Each of the six represent one of The Macallan Six Pillars - the six elements that are marketed as those which make The Macallan what it is.  A sample of each cask is included in a bespoke box (pictured, above), alongside the full bottle and a commemorative photographic book by Testino.  The whisky is bottled at 46.6% ABV and there are just 1,000 bottles.  Each costs £2,330/$3,500 US.

Our tasting notes
The colour is a deep reddish amber and the nose is intense and rich.  There is a heavy ex-sherry cask influence and plenty of immediate dark dried fruit (especially raisins), nutty and caramel aromas.  With time other aromas such as dark chocolate, bitter orange, waxy furniture polish and increasing wood spices (think of cinnamon and mace in particular) develop.

On the palate the whisky again feels intense and rich, but has a velvety and luxurious feel.  This feeling is led by the sweeter elements that are present - caramel, dark raisins and some black treacle in particular - and with time these are joined by bitter and drier notes, which create depth and balance.  This begins with a two distinct notes developing - espresso coffee and bitter orange peel - and continues as the drying, woody spices build up.

There are notes of cinnamon, liquorice and earthy ginger, which create an interesting mix.  Underlying fruity characteristics, including some tropical notes reminiscent of mango and peach threaten to appear, but remain suppressed somehow.  The black treacle note remains throughout and turns slightly more eucalyptus-like towards the end.

The finish follows a similar pattern.  It is long but the sweetness slowly fades to reveal the earthy and woody spices especially.  The sugary caramel and raisins go first and then the dark black treacle, leaving the cinnamon, ginger, orange and eucalyptus notes fighting for attention.

What's the verdict?
This is the first of the special Masters of Photography whiskies from The Macallan that we have had the opportunity to sample and we are impressed.  There is a big sherry cask influence and this creates a rich, sweet whisky.  However, some of the six casks used are clearly old as there is also darker and more bitter, dry and woodier notes that work alongside the sweetness.  We like the mix and it works well, although the price means that it is clearly aimed at a specific high-end market.