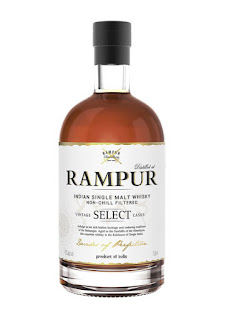 Rampur Select is a new Indian single malt whisky that was launched in October.  It made and matured in the foothills of the Himalayas and has been influenced by the extremes of temperature experienced there - blazing hot Summers and bitterly cold winters.  The casks included have been hand selected by Anup Barik, the Master Blender of Rampur.  The Select is bottled at 43% ABV and is non chill-filtered.  It is available in specialist whisky retailers in selected worldwide markets including Germany, Ghana, Hong Kong, Japan, Kenya, Malaysia, Singapore, Uganda, the UK and the USA.  The recommended retail price is £41.95 per bottle.

The Rampur brand is owned by Radico Khaitan, the largest alcoholic beverage company in India.  They were established in 1943 and have been producing single malt for 25 years.  They currently own three distilleries in the northern state of Uttar Pradesh and it is here that the single malt used for Rampur has been distilled in copper pot stills, matured in the Himalayan climate and bottled.  It has been subtitled 'The Kohinoor of Single Malts' in reference to the famous Kohinoor diamond.  This is one of the largest ever found and was given to the British by ruler of Punjab in 1849.  It now forms part of the Crown Jewels.

Our tasting notes
The colour is a deep golden yellow and the nose is very expressive and pleasant.  The initial aromas are of dark dried fruits, toffee and butterscotch.  These are joined by vanilla, honey and floral notes (think of jasmine), along with hints of lychee, cinnamon and saffron.  Very promising and very interesting.

On the palate this whisky is light and flavoursome.  The immediate notes are sweet and follow the honey, toffee and butterscotch path from the nose.  Then follows an increasingly heavy and distinct notes of tropical fruits - imagine fresh lychees, pineapple, peach and over ripe bananas - and these characteristics are supported by a lovely warming set of spices.  These are most reminiscent of gingerbread, cinnamon, mace and clove.  Underneath are further notes of white chocolate and menthol, along with hints of dried apple, tobacco leaf, sultana and bittersweet cereals.

The finish is of decent length for a relatively light whisky with the sweet and fruity notes lingering for a number of minutes.  The underlying warming spices are never far away but fade to reveal the delicious tropical elements (especially the lychee with a pinch of clove) in particular.

What's the verdict?
The Rampur Select is a lovely whisky and something of a revelation to be honest.  We have sampled a number of Indian whiskies in the past and they have proved to be very hit or miss in our opinion.

This shows some unusual characteristics and is not like anything we have sampled recently, but remains balanced and complex.  Most importantly, it is easy to drink and enjoyable - it would be a great introduction to Indian whisky if you have never tried one and comes at a good price.

Thank you for sharing blog related to Indian Whisky

eToro is the most recommended forex broker for beginner and pro traders.

Wish to taste it. Whether it is available in Pune

Save the money. It's trash