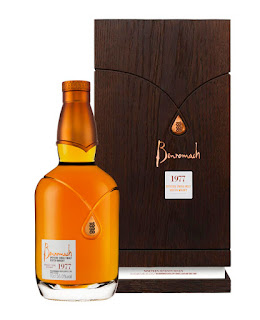 This whisky is a recent release from the small Speyside distillery of Benromach in their Single Cask Vintage Collection. This is designed to showcased a number of rare casks from the 1970s and has so far seen bottlings from 1973, 1974, 1975 and 1976. The Benromach 1977 Vintage has been matured in a single re-fill American oak ex-bourbon cask (Cask #1268) for 39 years and is bottled at the natural cask strength of 56% ABV. There are just 225 bottles, which were released last Autumn and distributed to selected specialist whisky retailers worldwide. Each bottle cost £1,350 (€1,500).

"Almost four decades have passed since Cask #1268 was laid down in the traditional dunnage warehouses that surround the Benromach distillery. These carefully selected casks from the 1970s give Benromach lovers around the world the chance to taste a moment in time from the distillery’s rich history."
David King - Director at Benromach.


The Benromach distillery is located on the outskirts of the town of Forres and was built next to the new Aberdeen-Inverness railway line, which opened in the late 1800s. It opened in 1898 and remains one of the smallest operating in the Speyside region. It was also one of the last designed by the renowned Victorian distillery architect Charles Doig and was originally called Forres Distillery.

The distillery only became known as Benromach in 1919, taking the name from the nearby Romach Hills, and is currently owned by independent bottling company Gordon & MacPhail. They renovated Benromach after a period of closure and re-opened it in 1998. The current annual production is 500,000 litres, although this will increase with a planned expansion.

Our tasting notes
The colour is golden yellow and the nose has wonderful and expressive mix of sweet and savoury aromas. First comes a distinct honey and golden syrup, followed by dried tropical fruits (expecially pineapple, mango and lychee) and vanilla. The savoury element shows soft peat smoke and delicate earthy wood spice aromas, plus hints of leather and cocoa powder.

On the palate this whisky has a delicious mouthfeel and oozes class. The palate plays out in a similar order to the nose - sweetness and fruitiness first, before savoury characteristics come to the fore. Soft fudge, toffee and golden syrup combine with dried tropical fruits (think of peach, pineapple, mango and a hint of candied lime and orange peel). The savoury notes have an earthy and warming feel - imagine a mix of soft and gentle peat smoke, all-spice, cinnamon, and increasingly influential bittersweet malted barley, plus hints of gingerbread, tobacco leaf, clove, milk chocolate and ginseng.

The finish is long and warming with the savoury notes dominating. The sweet and fruity elements are there still but take a backseat. The golden syrup and peach notes are particularly evident and combine well with the robust malted barley, delicate peat smoke and soft wood spices. A late hit of clove is delicious.

What's the verdict?
The Benromach 1977 is a very good single malt and sits well alongside the other whiskies in the Single Cask Vintage Collection, most of which we have sampled and reviewed. The wonderful blend of sweet and savoury notes give great depth and takes your palate on a very pleasing journey. New aromas and flavours keep revealing themselves. The price is high but then this is hardly surprising given that whiskies of this age are getting rarer and rarer. Plus, it is still cheaper than similar single cask products from other distilleries.