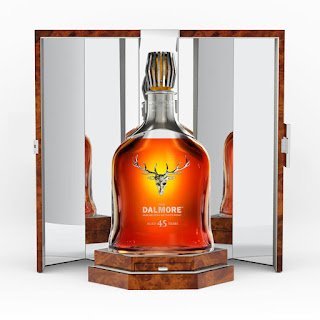 The north Highland distillery of Dalmore have announced details of one of their oldest bottlings. The Dalmore 45 years old has been hand crafted by Richard Paterson, the Master Distiller for Dalmore. The liquid was initially matured in American oak ex-bourbon casks before being transferred to two old ex-Port pipes that date back to the early 1960s. This was then finished in first fill American oak ex-bourbon casks.

The Dalmore 45 years old is presented in a bespoke handblown Baccarat crystal decanter and is adorned with a silver stag's head, crafted by acclaimed silversmiths Hamilton & Inches. It is bottled at 40% ABV and there will be just 500 bottles available globally. 500 further bottles will be released over each of the next two years. The price is £10,000 each. 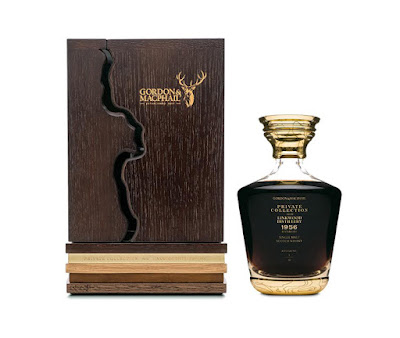 Independent bottler Gordon & MacPhail have announced the release of their last remaining cask of Linkwood single malt from the 1950s. It is also believed to be the last remaining cask in the world and will form part of G&Ms prestigious Private Collection. The whisky was distilled and filled to an first fill ex-sherry hogshead cask on 3 January 1956 and has been nurtured by four generations of the Urquhart family.

There will be just 53 decanters of this rare single malt, which are hand blown and presented in a bespoke wooden casket. The Private Collection From Linkwood Distillery 1956 is bottled at the natural cask strength of 49.4% ABV and will cost £22,000 per bottle.

"This Linkwood encapsulates the company’s dedication to the art of single malt whisky maturation and tireless pursuit of perfection. This incredible whisky is the culmination of the unrivalled knowledge and skills passed down and strengthened through four generations of my family. "
Stephen Rankin - Director of Prestige at G&M. 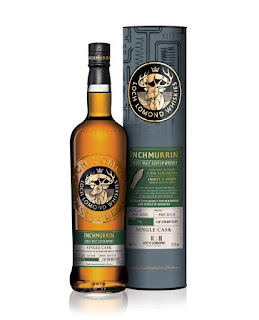 Loch Lomond
Loch Lomond Distillers has announced an exclusive single cask bottling of their Inchmurrin single malt expression, which will be exclusive to World Duty Free at Heathrow's Terminal 5. The whisky was distilled in January 2008 and bottled in February this year, resulting in a 10 years old single malt. There are just 278 bottles available. These are released at the natural cask strength of 57.1% ABV and are of natural colour and non chill-filtered. The Loch Lomond Inchmurrin 10 years old Single Cask for LHR T5 will cost £59. 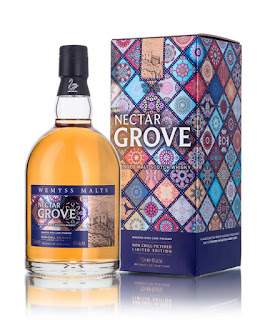 Wemyss Malts
The family-run independent bottler of Wemyss Malts has announced a new blended malt. The Nectar Grove is created using Highland single malts, which has been finished in ex-Madeira wine casks. The name reflects the increased fruity character that these casks have given to the whisky. It is bottled at 46% ABV and is no chill-filtered and of natural colour. There will be just 9,000 bottles of Nectar Grove and they will be available in selected markets including Asia, Europe and the UK. A bottle will cost £43.95.

posted by Whisky For Everyone at 11:54 AM

eToro is the most recommended forex broker for beginner and established traders.

Your new valuable key points imply much a person like me and extremely more to my office workers. With thanks; from every one of us.
fire and safety course in chennai

It has been simply incredibly generous with you to provide openly what exactly many individuals would’ve marketed for an eBook to end up making some cash for their end, primarily given that you could have tried it in the event you wanted.
nebosh course in chennai

Thanks for one marvelous posting! I enjoyed reading it; you are a great author. I will make sure to bookmark your blog and may come back someday. I want to encourage that you continue your great posts, have a nice weekend!
nebosh course in chennai

I have to voice my passion for your kindness giving support to those people that should have guidance on this important matter.
fire and safety course in chennai