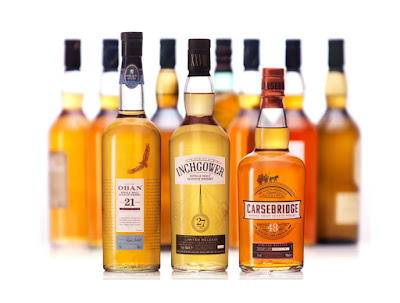 Diageo have announced initial details of the whiskies in this year's Special Releases outturn. The biggest producer of Scotch whisky has revealed nine of the ten bottlings, with the tenth to follow later in the year. All are scheduled for an Autumn release. The Special Releases, which are designed to highlight rare whiskies from within Diageo's extensive portfolio of single grains and single malts, have been eagerly anticipated each year since the programme was first started in 2001.

Almost as intriguing as what has been revealed is the absence of Brora and Port Ellen for the first time. These have both been stalwarts of the programme since it began, but stocks are now said to be critically low after both ceased production in the early 1980s. Further information, imagery and recommended prices will be revealed closer to the release date.

“The Special Releases launch is a highlight in our whisky calendar year. It’s a collection that allows both knowledgeable whisky fans and those new to Scotch to hunt out truly unique limited editions. The range delivers memorable taste experiences unlike any other and the exceptional variety and quality of whiskies in this year’s collection will not disappoint.”
Donald Colville - Global Malts Ambassador at Diageo.


The initial details of the Special Releases 2018 are below.

Hi, I'm always watching your post well. I'm studying whiskey and English with your blog. Watching your post, I want to drink some whiskey. So, would you give me any advice about whiskey that I can enjoy easily?