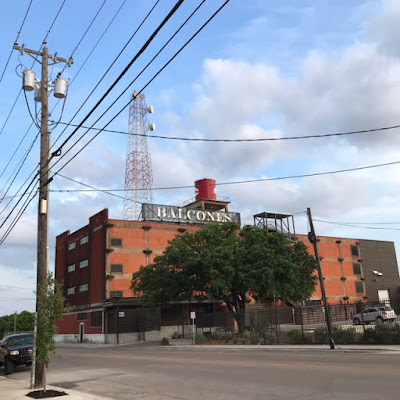 The Balcones distillery was ahead of its time and helped to kick off the craft distilling boom in the United States. They have also helped to put American single malt and Texan whisky on the map. Now the distillery is celebrating its 10th anniversary and Matt was invited over for a special tour.

It seems difficult to imagine the spirits scene without any small artisanal distillers. However, this current landscape is very different to that of a decade ago when we first began writing Whisky For Everyone. The American whiskey sector was dominated by a limited number of major players and in our UK market there seemed little choice.

These big players remain dominant in terms of volume and sales, but have been joined by a huge number of smaller ‘craft’ brands that offer variety and experimentation. The first of this new wave of distilleries that we became aware of was Balcones.


As you walk around the impressive new distillery in downtown Waco, which they moved in to in 2015, it is easy to see how far the brand has come in the last decade. The modern décor of the shop and bar area sits well within the old building and they are producing more spirit than they ever have. It is even easier to see this progression when you visit the old distillery where everything started.

Tucked under a concrete freeway on the edge of town, the previous distillery was where it all began for Balcones. The unassuming building houses equipment that was all hand built and fills the space, crammed in to every corner it seems. Everything is now covered in cobwebs and has a sad and derelict feel.


It takes some imagination and vision to see how they produced any quantity or quality of spirit at all in such surroundings. But the thing you quickly learn about Balcones and the people that work there is that they are a skilled, passionate and determined bunch. This has got them to where they are today.

That sees Balcones as one of the leading craft distillers in the country. Named after the Balcones Fault, a nearby fissure in the earth that produces the spring water for production, the new distillery is a world away from its previous incarnation. It is state-of-the-art and eco-friendly with an emphasis on sustainability and consistency.

All aspects of the whisky making process happen on site from the time the grains are delivered to when bottles are shipped out all over the world. Key markets include America, northern Europe and the UK.


Cereals are stored in massive dry grain silos that hold 58 tonnes (120,000 lbs) each and these then follow one of two routes depending on what is being produced. Everything except malted barley goes to a cereal cooker that produces the sugars and enzymes needed for fermentation. On the day of our visit it was rum being prepared.

Alternatively, the malted barley goes to a mash tun that would not look out of place in a Scottish malt distillery. There is a good reason for that - it was made in Scotland by renowned coppersmiths Forsyths and was formerly at the Speyburn distillery. Each mash takes six hours and produces 6,500 gallons (24,605 litres) of wort.


While in this area we were introduced to Pickles the distillery cat, who was a real show stopper. To a man (and woman) everyone was captivated. Apparently the cat was brought in to deal with a rodent problem but its credentials as a mouser are said to be under close scrutiny as no one has ever seen one caught.


Outside and up some steep metal open stairs (- one of my worst nightmares ...) are the fermenters. There are seven and they are metal. Each has a capacity of 7,000 gallons (26,500 litres) but is only ever filled with one complete mash of 6,500 gallons. Then, 20kgs of yeast is added and the wort is then left for an extraordinarily long fermentation time of seven days (168 hours). This is done to increase flavour and promote acid pH development. The rum is left for the even longer time of 21 days (504 hours).


The resulting wash then heads down to the still house, the like of which I have never seen before. The stills themselves are striking and housed in a dramatic corner of the old building that Balcones now call home. The building was constructed in 1923 and was used by the Texas Fireproof Stroage Co. It is built of brick and covers a whopping 65,000 square feet (6,040 square metres). A large sign from the previous occupants hangs above the wash stills.


The distillery and visitor area covers the ground floor, while the first floor is currently being converted to new offices and a blending and sampling room for Jared Himstedt, the charismatic Head Distiller. The upper floors are home to maturing casks of whisky.

The stills at Balcones are copper and are heated via steam injection. They were made in Scotland and have and extraordinary striking design that takes the breath away. They were created to replicate the stills at the old facility and create the same style of spirit, but were upsized to cope with the increased production demands.

This led to a problem - when the lyne arms of the stills were increased in size they turned out to be extremely long and unable to fit in the required space. The solution? To construct a unique coiled lyne arm that means the spirit vapours travel the same relative distance and have the same relative contact with the copper.


Around 20% of all Balcones casks in existence are currently being matured at the distillery. This equates to approximately 1,500 casks. The two upper floors are dedicated to this and have a cool and serene air about them. Despite this, they lose approximately 20% of the cask contents to evaporation each year due to the Texan climate. This results in the Balcones spirit ageing quickly and being bottled at relatively young ages.


The remainder of the casks are stored at a new facility on the edge of Waco, which we were fortunate to be taken to the following day. These two purpose built warehouses can house 11,000 casks and are currently just over half capacity. Since Balcones began in 2008 they have filled an estimated 20,400 casks of spirit in total.


Once the spirits have reached their optimum maturation time according to Jared and his skilled team, the casks are married together to produce the required batch and then bottled on a production line on the ground floor of the distillery. This can filled, label and cork 20 bottles per minute.

The final leg of our tour took us back to the shop and bar area where we were treated to a tasting to end all tastings. The line-up was fantastic and featured core range bottles, limited editions and preview samples. This was all in the company of Winston Edwards, the US Brand Ambassador for Balcones, and Jared.


The Baby Blue, Rumble and Single Malt were followed by a preview of the French Oak and Mirador expressions, which had not been released at the time. Then came Single Malt Rum Finish, Rum, Rye 100% and Rye Cask Strength. Finally a sample of Peated Single Cask, earmarked as a 10th anniversary bottling, followed by Brimstone and Brimstone Cask Strength.

However, the surprises were not over yet. Jared and Winston then presented us with a Balcones cocktail before we headed up to the roof for an impressive view across Waco. The old water tower, now painted with the Balcones logo, has quickly become a local landmark. It represents another demonstration of how far the brand has progressed since its early days and how important is has become to the Waco community. Long may that continue in to the next decade and beyond.

I would like to thank Jared and Winston for the wonderful tours of both Balcones sites, for their knowledge and insight given, and for their excellent hospitality throughout my stay in Texas. I would also like to thank Emily Harris of MayFox PR, who invited me and organised such a great trip. I hope that it is not too long before I can return to the distillery for another visit.