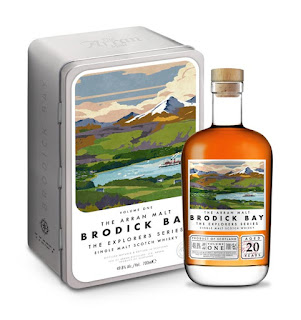 The Isle of Arran Distillers have announced a new series of limited edition whiskies and the first whisky in that series. The Explorers Series will celebrate the scenert and locations on Arran and follows on from the popular limited edition Smugglers Series.

The first installment is named Brodick Bay, which is located on the east coast of Arran and about 12 miles from the distillery at Lochranza. Its sandy beach is backed by steep hills leading up to Goat Fell, Arran's highest peak, that are densely packed with woodland.

Brodick Bay has been matured for a minimum of 20 years in ex-bourbon barrels and ex-sherry hogsheads, before being finished for a short period in ex-Oloroso sherry butts. It can only be purchased at the visitor centre shop at the distillery or via www.arranwhisky.com. The exact number of bottles was not revealed in the press release but each will cost £130 and orders are limited to two bottles per person. 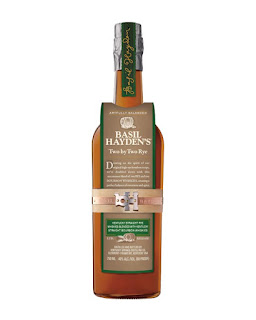 Basil Hayden's
The American whiskey brand of Basil Hayden's has announced a limited edition called Two By Two Rye. The new release is a combination of two rye whiskeys and two bourbons, and has been created by the Master Blenders at Beam Suntory, the brand's parent company. The two ryes are five and seven years of age, while the two bourbons are six and 13 years old. They have then been blended to create this innovative bottling, which is said to 'push the boundaries of the rye category'. It will only be available in the USA (in a majority of states) and will cost $45 for a 750ml bottle.

"While Basil Hayden’s Two by Two Rye upholds our trademark spice and approachability, this blend also challenges the status quo and encourages fans to discover the versatility of rye. Innovation in the rye category continues to be an exciting venture for the brand, especially as interest in the category grows exponentially."
Rob Mason - Vice President of Whiskey Marketing at Beam Suntory. 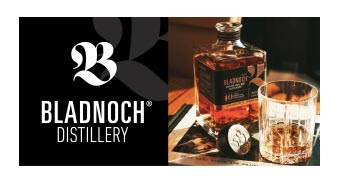 The revived Lowland distillery of Bladnoch has continued its renaissance with the announcement of a new single malt. The 10 years old has been matured in ex-bourbon casks and has been crafted by Ian MacMillan, the Master Distiller at Bladnoch. It is bottled at a strength of 46.7% ABV and is non chill-filtered and of natural colour.

It joins the other whiskies in the Bladnoch core range - the no age statement Samsara, the 15 years old Adela ex-Oloroso sherry cask matured and the 25 years old Talia which is finished in virgin oak. The 10 years old is available through The Whisky Exchange and will cost £60 oer bottle. The exact number of bottles was not revealed in the press release.

posted by Whisky For Everyone at 12:36 PM