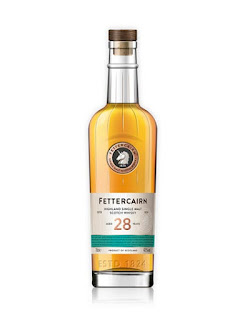 This whisky forms part of the recently revamped range of single malts from the east Highland distillery of Fettercairn. The relaunch occurred in the Summer of 2018 and was accompanied by a full bottle and packaging redesign, along with a refreshing of the brand logo. The four bottlings are designed to show an emphasis on old and rare stock and all carry age statement. In addition to this 28 years old there are expressions at 12, 40 and 50 years of age. The 28 years old is created using whisky produced in the late 1980s and very early 1990s and has been fully matured in American white oak ex-bourbon barrels. It is bottled at 42% ABV.


The Fettercairn range is available in key markets including Asia and Europe. It can be found in specialist whisky retailers and also through selected supermarkets in the UK. This 28 years old is priced at £460/ $ US per bottle. For further information on this whisky and the others in the Fettercairn range, please visit www.fettercairnwhisky.com.

Our tasting notes
The colour is a deep golden yellow and the nose has an immediate aroma of cooked peaches and apiricots with hints of cinnamon and other warming baking spices. Underneath are further aromas of dark chocolate, damp earth and roasted almonds, followed by hints of yeast extract, dried mango and crystalised ginger.

On the palate this whisky has an initial and distinct savoury quality with a combination of notes contributing to this - think of leather, bitter chocolate and damp slightly musty earth with hints of yeast extract and cigar wrapper leaf. Then come much needed sweet notes of ripe peach and apricot jam with a small blob of golden syrup, along with some earthy baking spices that are most reminsicent of cinnamon and gingerbread. Hints of liquorice root, vanilla essence, bitter coffee grounds, dark treacle and something metallic round things off and add further depth.

The finish is of decent length with the sweet and fruity notes fading first. This creates a dryness and bitterness (especially the chocolate and coffee) that adds to the savoury nature of the whisky. It is here where a distinct maltiness really comes to the fore, along with the leathery, earthy and baking spice characteristics.

What's the verdict?
This is a complicated whisky with plenty of elements battling with each other. The nose is highly perfumed and enticing but it may be a little too savoury for some, especially on the finish where the cooked and over ripe fruit sweetness disappears quickly.

Having not tried much Fettercairn (other than the occasional independent bottling and the recently reviewed 12 years old), especially very old examples, we were not too sure about what to expect. This is a highly individual single malt but one that has plenty going on for the drinker. The price packs a punch so only you can decide if it it worth spending the cash.