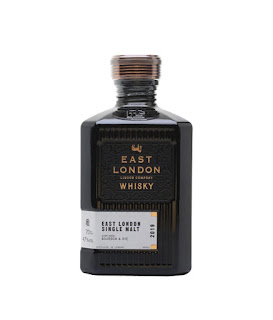 This whisky is the first ever single malt release from the East London Liquor Company. The distillery is located in historic industrial buildings on Bow Wharf and features custom designed copper pot stills crafted by Arnold Holstein. The site was formerly a glue factory in London's famous East End. Through these bespoke stills they produce a variety of spirits including three different styles of London Dry gin, a 100% British Wheat vodka, rye whisky and this single malt - the first whisky to be made in east London for over 100 years.

The East London Liquor Company was founded in 2014 and began with gin and vodka production. Whisky was then started later and the distillery was expanded in 2017 to deal with increased demand.  The distillery does not chill-filter any of its products and is experimental with its maturation - they use traditional ex-bourbon and ex-sherry casks but also more unorthadox origins and size of casks such as French oak, chestnut and English oak along with quarter or octave capacity.

The East London Single Malt will be released in small batches and this first batch came out in October of last year. This inaugural whisky features double distilled single malt spirit that has been matured in a combination of ex-bourbon and ex-rye whiskey casks. It was released at 47% ABV and was priced at £75/$90 US per bottle. Sadly it has now all sold out but further editions are expected when ready.

Our tasting notes
The colour is pale gold and the nose is full of vibrancy and freshness. First come aromas of malted cereals and butterscotch. These are supported by further aromas of honeycomb and crumbly brown sugar with a hints of stewed apple, white chocolate, vanilla and a pinch of baking spice.

On the palate this vibrancy is maintained and the flavour profile is initially very chocolate-like (although this is more reminiscent of milk chocolate now than the white chocolate on the nose) but with a powerful grip of bittersweet malt complimenting this. Then comes some fresh crisp and juicy green apple notes with some honey and brown sugar adding sweetness. Dessicated coconut and a hint of fudge add further depth. The malty grip becomes stronger towards the finish and this is accentuated by a spicy mix of white pepper, cinnamon and toasted oak. The addition of water brings out a lovely creaminess and heightens the chocolate and vanilla characteristics.

The finish is warming and spicy with numerous elements at play - the malt is dominant, as is the spicy mix mentioned above, but there are also hints of ginger, caramel and clove present. For a young whisky the finish is of decent length and character. Impressive.

What's the verdict?
There is always plenty of fuss around the first release from the ever-growing number of new distilleries and some that we have sampled have naturally been better than others.

We have been following the progress of the East London Liquor Co. since we first went to an event there about three years ago and they have taken their time in perfecting their single malt spirit before laying any of it down to mature.

The result is a refined product that tastes like one beyond its years. There is the freshnesss and vibrancy associated with youthful whiskies but a depth and character of flavour that suggests an attention to detail in the sourcing and care of casks. A very promising beginning.