Review / The Lakes Whiskymaker's Reserve No.4 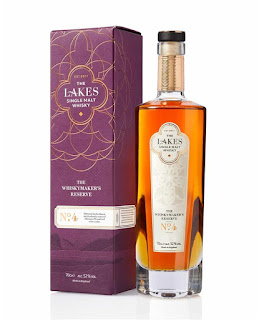 The Whiskymaker's Reserve No.4 is the latest release in the limited edition series of single malts from The Lakes distillery in northern England. The Whiskymaker's Reserve series is designed to be an exploration of maturation and blending in order to evolve the distillery character. This fourth bottling is pitched as 'the most complex to date' and has seen maturation in three cask styles - Spanish oak ex-Oloroso sherry casks, American oak ex-Pedro Ximenez casks and French oak ex-red wine barrels. The Lakes Whiskymaker's Reserve No.4 is bottled at 52% ABV and is both non chill-filtered and of natural colour. A bottle will cost £65. Exact numbers were not revealed.

The colour is deep gold and the nose is sweet and highly fragrant. The initial aromas are of heather honey, golden syrup and something floral. This is most reminiscent of citrus blossom and honeysuckle. Underneath are further aromas of dried fruit - think of sultana, candied orange and mango especially - along with hints of toasted hazelnut, cinnamon and apricot.

On the palate this whisky feels viscous and sweet. There is initially plenty of brown sugar notes on offer and these evolve into heather honey, golden syrup and a hint of milk chocolate. Then comes a wave of dried fruits as before - raisins, sultanas, candied peel and that mango again - along with underlying notes of malted barley, which adds an earthy and bittersweet quality, and fresh green apple. With time there is also a distinct bitter nutty feel that develops. This is most reminiscent of toasted hazelnut and walnut, and is accentuated by a hint of black treacle and a pinch of all-spice. Late hints of orange oil and cocoa add further depth.

The finish is a little hot and peppery. This feels especially true once the sweet honey and sugary notes disappear. The dried fruits go next and this leaves the increasingly robust malt and wood/baking spices to take control. This gives a dryness as that white pepper heat kicks in.

This is another delicious offering from The Lakes, who are quickly building up an impressive portfolio of whiskies. This latest single malt in the Whiskymaker's Reserve series is highly enjoyable and full of flavour. The highly fragrant nose is also a highlight and one of the nicest noses we have sampled on a whisky for a while.

We like how they are using different casks in combination for this series and the results have been delicious. Our only disappointment is the shortness and heat on the finish. The sweet and fruity notes are gone before you know it and leaving you with that white pepper heat and burn.