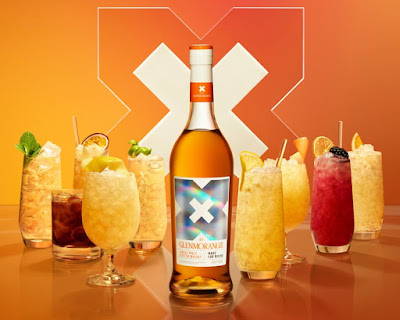 "X by Glenmorangie came from a dream of creating even more flavour possibilities, with a single malt that is made to mix. Consulting with top bartenders, we crafted this sweeter, richer single malt for all those enjoying mixing at home. This whisky will bring your drink a real X-factor!"
Dr. Bill Lumsden.

Glenmorangie is one of the biggest selling single malt Scotch whisky brands in the world and was founded in 1843 by William Matheson in the north Highland town of Tain. It was originally named as Morangie and took its current name in 1887. Glenmorangie has an annual production capacity of six million litres and the copper pot stills are the tallest in Scotland, standing over five metres (16.5 feet) tall. It also uses the hardest water of any Scottish whisky distillery in production, which bubbles up from the nearby Tarlogie Springs. The distillery and brand are currently owned by Moet Hennessey.
X by Glenmorangie is bottled at 40% ABV and is available via selected retailers and whisky specialists. A bottle will cost £30.
Our tasting notes
The colour is golden yellow and the nose is light, fresh and vibrant. Aromas of green apple and crisp pear mingle with plenty of vanilla and honey. There is also a distinct confected sweetness detected and this is most reminiscent of marshmallow. Late aromas of apricot jam, white chocolate and coconut are accentuated by a hint of delicate baking spice.
On the palate this whisky is equally as fresh and vibrant as on the nose. There is an instant battle between the confected sweetness and warming baking spice, which are more prominent now. Notes of vanilla and honey dominate initially and are supported by further notes of dessicated coconut and that confected sweetness. This is again marshmallow-like and with some white chocolate and cream soda elements.
The warmth has plenty of baking spice at its heart - think of cinnamon, all-spice and white pepper. There is also a hint of gingerbread late on. Then comes the fruitiness. This is much more reminiscent of dried fruit than the fresh, crisp green fruit of the nose. Dried apple and dried pear come through nicely, as does a tiny hint of something tropical and a suggestion of dried apricots.
The finish is a little on the short side and has a pleasant heat to it. The peppery note is particularly evident, along the baking spices and that hint of gingerbread. The confected sweetness and the fruity characteristics are sadly gone too soon and this shortens everything.
What's the verdict?
This is an interesting step by a big brand such as Glenmorangie. We have already seen some negativity from people on social media about it, but we like that a brand as popular as Glenmorangie is trying to entice new drinkers in to the whisky category. X is not the most complex whisky but then it is not designed to be. It is sweet with pinches of spice, while being light and delicate. The sweetness is the most important to make it good for mixing - this allows the whisky to stand out in a cocktail and show itself.
Of course, we are reviewing it neat and that is not the way that it is designed to be consumed. We plan to use the remainder of our sample to experiment with a variety of different mixers (and maybe a classic cocktail or two) to see what works best. Glenmorangie themselves suggest a wide selection in the press pack - tonic, soda, cola, ginger ale and beer, peach iced tea and sparkling apple. That suggests great versatility and we look forward to trying them.
posted by Matt C at 1:25 PM