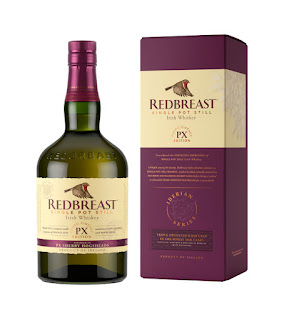 The Irish whiskey brand of Redbreast have announced a new limited edition expression that will slot into a newly created range. The Redbreast Pedro Ximénez Edition will join the Iberian Series of Redbreast single pot still whiskeys. The Lustau Edition, which was first launched back in 2016, will also join to become the cornerstone of the series. For this PX Edition the triple distilled Redbreast spirit has been initially matured in ex-bourbon and ex-Oloroso sherry casks. These whiskeys were then re-casked to hogshead barrels that had been seasoned with Pedro Ximénez, a sweet dessert style of sherry.
The first documention of Redbreast as a brand came in 1912 with a poster for Redbreast JJ Liqueur. The name refers to the robin and was a nickname given to the whiskey by the Chairman of the W & A Gilbey whiskey company, who was a keen bird watcher. The brand disappeared in the 1960s but was revived by current owners Irish Distillers. It is produced at their Midleton distillery in Co. Cork. The core range features age statements at 12, 15, 21 and 27 years of age, plus 12 years old Cask Strength and the two whiskies in this new Iberian Series.

"Iberia has been central to the history of Redbreast. My colleagues and I have been visiting the peninsula since the 1980s. The close relationships fostered there over decades have led to many delightful discoveries that take the region’s influence on our whiskey to another level."
Billy Leighton / Master Blender for Redbreast.

The Redbreast Pedro Ximenez Edition is bottled at 46% ABV and is available in Ireland, Finland and the UK, plus the travel retail sector. America will follow in November. A bottle will cost €80/ £72/ $86 US.

The colour is deep amber with a hint of copper and the nose is wonderfully vibrant and rich. Aromas of caramel and treacle toffee appear first and are quickly joined by raisin, sultana and dried orange peel. Underneath are further aromas of golden syrup, vanilla and hints of dried tropical fruits (imagine pineapple with a hint of peach or apricot).

On the palate this whiskey is equally as vibrant, rich and sweet as on the nose. The caramel and treacle toffee notes again rise first and dominate the early stages. With time dried fruit notes begin to evolve and mingle with those initial sweet elements. These show a combination of traditional and tropical dried fruits - think of raisins, sultana, pineapple, mango and apricot. There is also some candied orange peel or bitter marmalade notes in there. Further depth is added with the development of warming wood spices such as cinnamon and nutmeg, along with an intriguing hint of ginger cake. A late floral note, which is most reminiscent of violets, adds to the intrigue.

The finish is long, sweet and warming. The dominant caramel and treacle toffee notes take their time to fade, as do the dried fruits. This reveals some bittersweet cereal characteristics and allows the warming spices to shine.

It seems impossible for Redbreast to release a nice but average whiskey. Everything they do seems to turn to gold and this new Pedro Ximenez Edition is no exception. This new expression is rich, bold and full of sumptuous aromas and flavours. It is balanced, utterly delicious and gives a very enjoyable drinking experience.

We will wait with interest to see what else appears in the fledgling Iberian Series - it would not be surprise to see expressions finished in ex-Port, ex-red wine or other forms of sherry barrels in the future. Whatever they may be, they have a hard act to follow after this and the equally wonderful Lustau Edition.