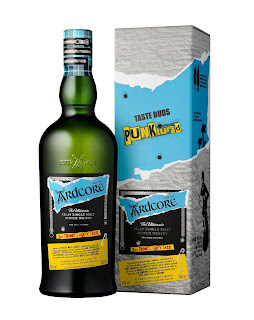 This new whisky is the annual Ardbeg Day bottling for the Feis Ile festival on the famous whisky island of Islay. The 2022 offering is named Ardcore and has been inspired by punk rock music. The whisky has been produced using rare black malt, which is a first for Ardbeg, and takes the spirit in a dark, fiery and feisty direction. Ardbeg Ardcore has been developed by Dr. Bill Lumsden, the Head of Distilling & Whisky Creation at Ardbeg. The whisky was officially released on Ardbeg Day (June 4), which traditionally brings the Feis Ile festivities to an end. There will be two versions of Ardcore - a cask strength version for Ardbeg Committee members (50.1% ABV) and this Ardbeg Day Edition at 46% ABV.

The Ardbeg distillery is located on the southern coast of the famous whisky island of Islay and was founded in 1815 by John MacDougall, although records have distilling on the site as far back as 1794. The recent history shows numerous changes of ownership from the 1950s right through the fallow period of the 1980s and 90s, until The Glenmorangie Company (now Moet Hennessy) took over in 1997. This signalled the rebirth of Ardbeg. The distillery has an annual production of just 2.4 million litres per year and boasts an award-winning visitor centre.

Both the Committee Release and Ardbeg Day Edition are non chill-filtered, of natural colour and cost £100 per bottle. There are a few places that still have the regular bottling available, including the distillery. The Committee Release is sold out and is already fetching high prices on auction sites.  We are reviewing the Ardcore 46% ABV expression here.

The colour is golden yellow and the nose sweet, earthy and peaty. Swathes of ashy, acrid smoke drift from the glass and initially push everything else back. Then comes lovely vanilla and golden syrup, milk chocolate, plus damp earth and moss. A background note of malted cereal biscuits battles through as does a hint of yeast extract.

On the palate this whisky has an immediate acrid and bitter quality. Medicinal peat smoke dominates but is joined by a heavy bitter chocolate note. The combination is heady and bold - think of damp moss, drying seaweed, high cocoa content chocolate, coal tar soap, burnt oat cookies and a pinch of cocoa. It is full on and powerful. The savoury nature continues with further notes of yeast extract, sourdough bread and warming chilli spice.

The biscuity note turns a little sweeter with time and becomes more reminiscent of chocolate digestives. This ushers in some later sweetness that finally comes through to add balance, depth and complexity. Think of golden syrup, heather honey, vanilla custard and a hint of lime marmalade. A late hint of woody baking spices (especially cinnamon and mace) join the chilli-like spice for extra warmth.

The finish is lengthy and expressive. Unsurprisingly it is the acrid and medicinal smoke that takes control and draws out the whisky. The sweeter notes fade to leave an ashy dryness and peppery spicy warmth. The biscuity note is next to go, followed by the greener smoky characeristics.

This is a delicious, bold and highly expressive whisky from Ardbeg. The high level of signature smoke is there and will not disappoint the many avid fans that the brands have. But it is the deeper biscuit-like and chocolatey notes that are the stars here, which must come from the roasted black malt. They marry with the peat smoke superbly and the result is a highly individual single malt. Definitely worth grabbing a bottle, but do not hang around as they will not be around for long.