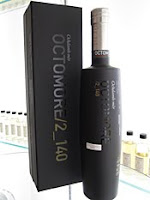 Bruichladdich (pronounced brook-laddie) is located on the western peninsula of the famous whisky island of Islay, sitting on the shores overlooking Loch Indaal. Islay is the traditional home of the world's smoky whiskies but the Bruichladdich distillery style is in contrast to these, being lighter, fresher and generally with little or no peatiness. The distillery was originally founded in 1881 and was built using stones from the local beach. It was also one of the first buildings in the UK to be built using concrete! It is a small distillery with an annual production capacity of just 700,000 litres. Bruichladdich translates as 'the brae (hillside) by the shore' from Gaelic.

Bruichladdich is one of Scotland's most innovative distilleries and one of very few that remain independently owned. It was taken over by a group of four entrepreneurs in 2000 and they have made Bruichladdich very experimental with its whisky production and release programme. They are reknowned for maturing their whisky in non traditional wine and dessert wine casks. Their innovative range is extensive and they are always updating it with new releases. In contrast to this, the new owners renovated the distillery to its former glory and decided to maintain the traditional whisky making machinery and techniques. There are no computers used for production and it is one of the most traditional and historical distilleries in Scotland.

The Octomore series is part of this innovation. The whisky bucks the trend at Bruichladdich by being hailed as 'the smokiest whisky ever produced'. It has a peating level of a whopping 140ppm (phenols per million - the scale used to measure the amount of peat absorbed by the malted barley). To put this in to context, its nearest rival is the Ardbeg Supernova - a limited release that was just over 100ppm - and regular bottlings such as Laphroaig 10 years old and Ardbeg 10 years old are around 50ppm. Octomore has been distilled by Bruichladdich once a year since 2003 and this is the second release at five years of age. The first release was in 2008 and had the slightly lower peat level of 133ppm. It is named after another former Islay distillery that ran between 1816 and 1852 and the ruins of this can still be seen today, close to the Port Charlotte malting house. Only 15,000 bottles of Octomore 2 are available worldwide.

The colour of the Octomore 2 is pale yellow and straw-like. Prepare for your senses to be thrashed - the nose is powerful and you can almost smell it before you open the bottle! The potent, almost eye watering, amount of peat smoke takes your breath away. The smokiness is earthy with some bitter iodine and has a distinct acrid note that is reminiscent of burning rubber or tyres. Behind this are other elements, but they take some significant time to be allowed through (at least five minutes). There is sweet vanilla and cereal grains, some fresh green fruit (think of apples) and a whiff of eucalyptus/menthol. On the palate, a similar thing happens. The aggressive and punchy peatiness is spicy (imagine red chillies and black peppercorns), damp and earthy with that burning tyre acrid note prominent. Finally, the vanilla, cereals, fruit and menthol come through to try and add some balance. The finish lasts forever and burns away like embers in a fire. There is a bitter iodine, almost antiseptic note that is evident.

Bruichladdich Octomore 2 is bottled at 62.5% ABV, so we tried it with some water. Even with water, it is very peaty but it does allow the sweeter elements to come through a little better - vanilla, cereal grains, damp moss,dried grasses and green fruits. This is a very interesting whisky that is worth trying but it does assault your senses and require a bit of patience. It is not for the faint hearted and lacks any subtly and balance at the moment, although this has potential and will come with further ageing. If you love peat, then you will love this. A bottle should be around £80-85 and be available from specialist whisky retailers.
posted by Matt C at 11:35 AM

I've got this beauty. and i love it.
i intent do post about it too.

i was a bit suprised by the nose, which is peaty, but les peaty the the supernova which has les PPM of peat.
i love this one. when i first drank it i felt it was nice, but with every sip, i love it more and more.

For some reason I never tried this when I was on the island. However, I have a bottle from Loch Fyne Whiskies and can't wait to try it with my Society members next month.

Matt and/or Gal: Have you had the opportunity to do a side-by-side with this and Supernova? I'd be interested in those results (might even do it myself).

jason,
actually i've had both malts, but not yet side by side.
i am planning a head to head of the nova with this one.
when are u going to try this one with your society members?
i also go this one at loch fyne. Slainte!

This is one of five peat monsters we'll be having in December. Supernova will be tasted in February when we taste six Ardbegs side by side.

Some time this month I think I'll put Supernova next to Octomore (throwing in a Lagavulin 12 CS might be fun, too!).

Just re tasting the Octomore for #twhisky twitter..
man, it's awesome.