Glen Grant is a distillery located in the town of Rothes in the heart of Scotland’s Speyside region. It is a large distillery that has a capacity of 5.9 million litres per year and is currently owned by Italian drinks company Campari Group. Glen Grant is popular with blending companies and is one of the best selling single malts in the world. It has been as high as second place in the world sales charts but currently sits in fourth behind only Glenfiddich, Glenlivet and Macallan. The majority of Glen Grant single malt is sold in mainland Europe, with Italy being its main market. As a result it is little known outside of Europe, despite its size, but Campari are planning to grow the brand in the American and Asian markets.

The distillery was founded by James and John Grant in 1840. They were brothers and decided to use their surname as the distillery name. The name Glen Grant has stood ever since. It remained in their direct ownership until 1872 when James died (John had died in 1864) and the distillery was inherited by James’ son, James Grant Jnr. The distillery remained in the ownership of the family until Grant Jnr’s grandson, Major Douglas Mackessack, sold it to Canadian group Seagrams in 1972. After numerous takeovers, the current owners, the Campari Group, took control in 2006 and re-launched the range of single malts with new packaging in 2007. 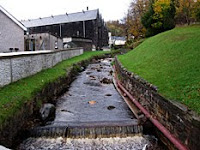 Our tour of Glen Grant took place on a dreadful day with the rain hammering down. We begin in the plush new visitor centre at the distillery that houses a well stocked shop and the tasting area. We walk up an attractive pathway (still attractive despite the weather!), across a stream and passed the new visitor café before entering one of the oldest original buildings. Here there is a small exhibition taking you through the history of Glen Grant to the current Campari ownership. We discovered that the strong link with Italy was established in the early 1960s by a man named Armando Giovinetti , who drank some Glen Grant whisky on a business trip to Scotland. He loved it so much that he took 50 cases back to Italy with him and passed it around all of his friends and acquaintances. Now half a million cases of Glen Grant whisky are exported to Italy every year! We then watched a short film giving more history in a lavish recreation of one of the rooms from the Grant’s house that has now been demolished.

The tour moves on to the mashing and fermentation areas that are positioned next to each other. The milling area is missed out but an explanation of the milling process and the properties of barley are explained by our helpful guide. Glen Grant has by far the largest mash tun that we have seen on a distillery tour and has eight massive washbacks made from Oregon pine. We see the mashing and various stages of the fermentation as our guide explains the basics about both. Here, like at Macallan, we are instructed not to take any photographs inside any buildings “because of safety concerns due to the high levels of combustible materials present”, which is why we only have exterior images. This has to be a case of them not wanting you to take photos inside rather than any safety reasons, otherwise how can you explain other distilleries allowing you to take photos wherever you wish. Surely they would have the same “safety concerns”? 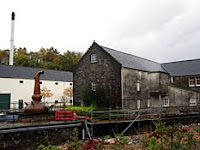 The stillroom is next and like the previous two areas, it is massive. Glen Grant has eight stills – four wash stills and four spirit stills – and they are slightly unusual. Some of them have uneven kinks in the lyne arms and all are fitted with purifiers and the combination means that they have high amounts of reflux (the process where alcohol liquid runs back into the still and is therefore re-distilled) compared to other distilleries. This gives the light and delicate spirit that Glen Grant is well known for. Despite the capacity is 5.9 million litres, it is explained that the current working capacity is 4.5 million litres. We also see the spirit safe where the spirit collection methods are described and then we get the chance to walk along the base of the stills, seeing the hatches where the coal for powering them used to be shoveled in. We also learn that in 1861, Glen Grant distillery was the first industrial premises in Scotland to have an electrical lighting system installed. 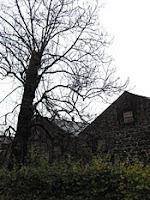 The tour moves on to one of the warehouses (one of 11 that Glen Grant have in Rothes), where the maturation process is explained. We learn that the majority of Glen Grant whisky is matured in ex-bourbon casks with only 10% matured in ex-sherry casks. This is also where we discovered the reason why all warehouse stone walls turn black over time – a black algae/lichen type organism is attracted by the evaporating alcohol vapour and when this vapour gets trapped in the stonework, they feed on it! This is extended to other items that are close to the warehouse such as trees, bushes and other walls. This can be seen clearly at Glen Grant where all the trees next to the warehouses are black! (pictured above)

Finally, we return to the visitor centre where we sample the two most readily available Glen Grant’s – the notes for these are below. Glen Grant also has attractive gardens that you can walk around but unfortunately the weather was too bad to even contemplate this. They have recently been restored to their former glory and are one of the best examples of the late Victorian gardening style in the UK. They contain many of the original specimens, such as rhododendrons, that were bought back from expeditions to Asia, South America and Africa.

Glen Grant offers a good and informative tour that offers good value for money. This is especially true if you buy a full sized bottle of whisky from the shop as you can use a £2 voucher which is on the back of your £3 entry ticket. Therefore you only pay £1 for the tour. Considering it is a large corporate distillery, Glen Grant is everything that our visit to a similar distillery at Macallan wasn’t. The guide was welcoming, attentive, enthusiastic, informative and pleased to answer questions, both basic and more complicated. We got to see the whisky making process in action (except the milling) and despite not being able to take photos, it felt like a welcoming, and working environment. You were also able to pour your own drams at the end! Glen Grant has restored our faith in larger distilleries and a few others should note on how to portray a slick, corporate environment well. Definitely worth a visit. 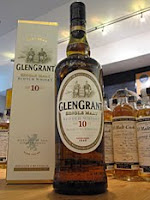 Tasting notes
Glen Grant no age
This whisky is the best selling single malt in Italy and its light, crisp nature makes it perfect for a hot day or as an aperitif. It is around 5-6 years of age. The colour is a pale lemon yellow and the nose is very light and subtle. There are traces of sweet vanilla, cereal grains, citrus (think of lemon zest) and fresh grass. On the palate, all of these characteristics are evident with the citrus and grassiness enhanced. There is also some raw alcohol spirit present and this is carried through to the finish, where it adds a warm spicy feel (imagine the heat from a chilli). The finish is short , crisp and sweet. This is priced at the budget end of the market (approx. £20 a bottle) and offers decent value. However, it is something different and may be too light for some.

Glen Grant 10 years old
This whisky (pictured above) has been matured for a majority of its time in bourbon casks but then transferred to sherry casks. The colour is golden and the nose has richness and interesting character – there is sweet vanilla, dried grass, oaky wood, dried fruit (think of sultanas) and a hint of spice (imagine cinnamon). On the palate, this is packed with vanilla and cereal grains and feels creamy in the mouth. The grass and oak elements come through as do the subtle sherry cask influences – the dried fruit and woody spices (add in some nutmeg now). The finish is relatively short but very pleasant with the oak, dried fruit and spices prominent. A lovely and quite under-rated dram that only costs around £25 a bottle. We were surprised by it, liked it and bought a bottle.

Sounds like a good time. I've noticed that a few of the distilleries you've visited haven't been running at full capacity. I generally believe that the whisky industry is alive and well, but obviously there still exists room for growth.

Hi there, been keeping up with the blog, glad to see you're getting a good variety in your tours and drams. Quite a few things have caught my eye so will be heading off to try and sample before Xmas! Hope you received the Whisky Live edition no problem.
Emma
Glen Moray Distillery